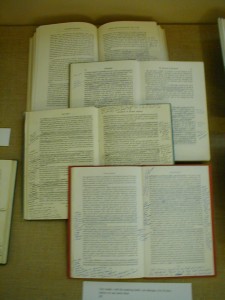 Marginalia. Librarians, archivists and some collectors consider it vandalism. Marginalia are the comments, asides, underlining and bizarre streams of consciousness that wind up inked or penciled into the margins of books over the hopefully long course of their lives.

I understand the hostility, especially among librarians. But for some of the books I collect, marginalia can offer some of the most interesting bits.

Foremost among these are my grammar books. I’ll snatch up pretty much any English-related textbooks I come across, and so far my collection spans the mid-19th to mid-20th century, and includes everything from primary school McGuffey Readers to college-level books on rhetoric.

Regardless, and I’m sure there are some readers who’ll know this is true, students of every age and type are apt to scribble in the margins. Most of it is as mundane as you imagine: “do ex. 4-16 by weds.” Even that is a little less mundane, to me at least, everytime I remember that “weds” was fifty or a hundred years ago. Did she get ex. 4-16 complete on time, you think? 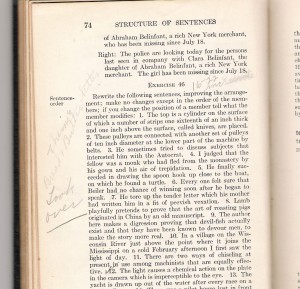 And here we have marginalia from The New Handbook of Composition, published in 1926 by Edwin Woolley. What I’ve detected, from copious marginalia in this book, was that it was once shared by Lois Bishop and Ruth Hoffmaster. Were the notes here penciled by Lois or Ruth? No idea.

In any case, I’m always drawn back to that emphatic underlined “Look Over.” Simplest explanation is that Ruth or Lois or someone should have ‘looked over’ that section, that page, that chapter or whatever.

But…that is a demanding “Look Over” isn’t it? Couldn’t it be that Ruth and Lois were huddled together in English class, when suddenly, something remarkable happened – over there! Ruth-or-Lois didn’t notice, she was looking elsewhere, but Lois-or-Ruth quickly alerted her to it, with a hastily scrawled note!

Or…maybe not. Maybe just in my head. And maybe it doesn’t matter a spit’s worth, and certainly I’ll never know one way or another. But it keeps me guessing, and I like guessing, and it’s helping to keep a few antiquarian book dealers in business. So there’s that.

Other times marginalia is a lot less mysterious, but also downright breathtaking. Case in point is my copy of the Advanced Course in Composition and Rhetoric, by the Right Honorable G.P. Quackenbos, 1876 edition. 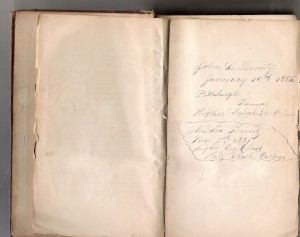 All I know about this book is that for a while it was in the possession of John Leo Benitz, late of Pittsburgh, Holy Ghost College student.

Tragically, John left no other marginalia. I know because I’ve checked every page. For all I know Master John never opened the book beyond the front end-papers.

But twice in 1885, twice in 11 months, in fact, Mr. John Benitz got the urge to practice his marvelous penmanship. And if I met him today I’d thank him for it.

My collection’s most recent edition surprised me by its dearth of marginalia. It seems to be primary-school level, so I was hoping for the best. Sadly, none to be found in this 1894 edition of Maxwell’s First Book in English. 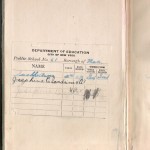 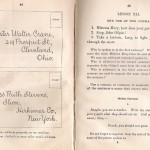 But you know how sometimes you go looking for one thing but find something else?

What I found in this book was synchronicity. Not of the earth-shattering, omen-fearing way, but more like the type that make me and Dr. Jung say Hmmm.

The first one I noticed as soon as I cracked the book open (the inside front cover is always the best marginalia spot). Instead I found that during the book’s tenure at PS 61, Borough of Manhattan, sometime after Aug. 16 1905, the book was (successively? maybe..) assigned to first Josephine Calandrino, then Josephine Bruno.

Two Italian girls in Manhattan named Josephine? Maybe not shocking, exactly. But it gave me pause. Then I flipped the pages at random and landed on the letter-writing exercise. Again, this isn’t life-altering, but – my grandfather was born and raised in Ilion, New York, and I’ve been up and down Prospect Street in Cleveland so often that I wouldn’t be surprised if I’ve sat on the stoop of Number 219 and eaten a sandwich. More than once.

And that, my friends, is book-detecting. My version of it anyway. Startlingly nerdy, maybe, but innocently so and it keeps me from far more nefarious activities. At least, that’s the hope.

So keep your fingers crossed for marginalia in my next big purchase. It’s best for everyone that way.

Doesn't know much about culture, but knows when it's going to hell in a handbasket.
View all posts by editor, facilitator, decider →
This entry was posted in New Post and tagged book collecting, book detective, marginalia. Bookmark the permalink.

One Response to Book Detective: marginalia