What a cool find, and thanks as always, YouTube. This documentary provides not only one of the few surviving recordings of Hemingway’s voice (he narrated it), it also represents one of his only willing collaborations with the film industry (he co-wrote it).

Contrast that with the scads of movies made from his books and short stories: The Killers, To Have and Have Not, A Farewell to Arms and For Whom the Bell Tolls. Hemingway himself was said to be most disgusted with the Hollywood ending that Hollywood gave A Farewell to Arms. Catherine lives in that version, which kind of negates the whole “Farewell” part. He was also said to have despised the adaptation of For Whom the Bell Tolls, owing to the wholesale erasure of the book’s anti-fascist message. From a 21st century perspective the other most glaring error of that movie was the casting of Ingrid Bergman as María. Bergman was an amazing actress, but dropping a brown wig on her wasn’t enough to turn her into a Latin ingenue.

Just like Lauren Bacall was and still is amazing. Her role in To Have and Have Not (that’s the one where she 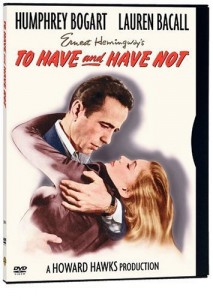 tells Bogie to put his lips together and blow) is still iconic. Too bad her character, along with the setting, plot and storyline, never appeared in the book. Although Hemingway’s lead character Harry Morgan acts, talks and walks exactly like Humphrey Bogart, transforming him from a luckless Conch smuggler into pretty much a reprise of Rick Blaine destroyed any other semblance of the book.

Hemingway probably hated that too, but it didn’t stop him from cashing Hollywood’s checks. Can’t fault him for that, especially considering that so many of his contemporaries like Faulkner, Dos Passos and Mrs. Parker eventually went to write for Hollywood. That’s something Hemingway never did.

Except that once, The Spanish Earth, written not for money but in a bid to save Spain from dictatorship. Two thumbs up for effort, Papa.

Doesn't know much about culture, but knows when it's going to hell in a handbasket.
View all posts by editor, facilitator, decider →
This entry was posted in New Post and tagged A Farewell to Arms, For Whom the Bell Tolls, hemingway, The Killers, The Spanish Earth, To Have and Have Not. Bookmark the permalink.

One Response to Ernest Hemingway: The Spanish Earth (1937)