Car Talk – end of an era (but a well-earned retirement) 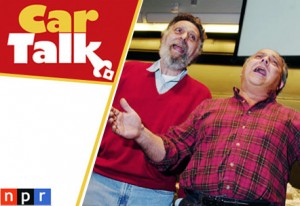 The concept of “radio show” is almost an anachronism now. The golden age of radio is long past, and most of us turn to other media for long-form entertainment.

But there’s a holdout, a happy anachronism, for me and millions of others. NPR–National Public Radio–offers not just news and classical music (nice as those offerings are) but also shows. Dozens of shows on dozens of subjects. From the lively storytelling of Garrison Keillor’s A Prairie Home Companion, to the gourmet advice for clueless gourmands on The Splendid Table, NPR continues to prove that the radio show is alive and well, diverse and enjoyable. 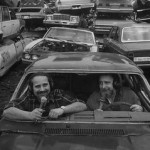 Oh, but this fall (cue dirge music here), NPR’s lineup gets a little less lively, a little less fun. Car Talk, brought to you by Click and Clack the Tappet Brothers (aka Tom and Ray Magliozzi), ceases production.

If you’ve never listened to Tom and Ray, you must. They’ll continue recording new weekly shows (check your local NPR station’s listings for times) between now and the end of September. And Car Talk will continue in syndication after that, thanks to the tens of thousands of listener calls they’ve answered over the years.

That’s right – for an awe-inspiring 35 years, Tom and Ray, both professional mechanics and repair-shop owners, have been fielding calls, helping hapless listeners sort out their car woes. Simple enough format, yes? Maybe; but if it were that simple, it wouldn’t have earned that longevity.

It comes down to their personalities. These guys are hilarious. They bond immediately with every caller, perhaps gently make fun of them and their situation (“Sticky brakes? Yeah, you’re doomed.”), but they always try to help, and they always entertain.

Their wit and wisdom are legendary. They’re the authors of the almost-scientifically-proven Donna Factor. That is, if you see a woman driving a red Firebird or Camaro, nine times out of ten her name is Donna. (I mentioned this once to a co-worker of old, a proud owner of a red Firebird who’d personalized her license plate with her first name: Donna. She’d never heard of Car Talk, but the Donna Factor made her smile. A little.)

I’m such a fan of Car Talk (and the Donna Factor) that I gave them both prominent mention in my first novel, as my lead character purchased her coveted red Camaro. I named her Sara, though, hoping she could be that exception who proves the Donna Factor rule.

All of that–the Donnas and The Puzzler and the whackily informative interplay between two grizzled old gearheads–will be sorely missed. Yes, Tom and Ray have more than earned their retirement (in their announcement they said ‘it’s time to stop and smell the cappuccino’). After 35 great years, how could it be otherwise?

But before you go: I get a grinding noise every time I turn left; what should I do? (Their probable answer: turn right instead.)

Doesn't know much about culture, but knows when it's going to hell in a handbasket.
View all posts by editor, facilitator, decider →
This entry was posted in New Post and tagged Car Talk, Tom and Ray Magliozzi. Bookmark the permalink.