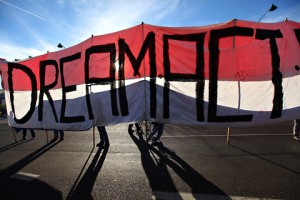 To call this, the U.S. presidential election cycle, the silly season, doesn’t at all do it justice. Because there’s nothing silly about naked hypocrisy and raw cynicism.

On Friday, June 15th the Obama administration announced a change in policy at the Department of Homeland Security that will, in effect, implement portions of the long-stalled DREAM Act. The new policy will cease deportation of, and allow work permits to be issued to undocumented immigrants who were brought to this country as children. Opponents of the president’s move are calling it amnesty. Proponents are calling it long overdue.

But at least those opinions, diametrically opposed though they are, are heartfelt. More worthy of contempt is the professional political class, which is desperately trying to figure out how to parlay this into votes.

Exhibit A is Mitt Romney, who veered hard right during the primary (particularly on immigration issues) and is now tacking back toward the center. In the debates he all but buried Rick Perry for supporting the DREAM Act, but now says he “agrees with” Marco Rubio, who’s authored his own version of DREAM (one that is in substance remarkably similar to Obama’s new policy). Romney is criticizing the president for his method of implementation, yet tepidly seems to support its goals, yet refuses to say whether he’d overturn it if elected. For those keeping score, that’s three weak-kneed positions on the same issue. It’s almost as if he’s given the Etch-A-Sketch a good shake, but hasn’t figured out what to do with it next.

And then we have Marco Rubio himself. The Tea Party-backed junior senator from Florida calls the policy “welcome news,” but also says it’s a “short-term solution” that will complicate, even prevent, a permanent legislative remedy. This from the senator who touts his immigration policy, who urges his party to get on board with it, but who refuses to actually put it up for a vote. Why? Because he knows immigration reform of any stripe is doomed to be blocked by members of his own caucus. This short-term solution is the only solution, and Rubio knows it, because as long as anti-immigration Republicans have the ability to filibuster, the DREAM Act (in any form) is a non-starter. Instead of recognizing this reality, one that’s plain to see to anyone not blinded by partisanship, Rubio criticizes the president for not following a path we all know leads to nowhere.

And last in this far-from-complete rogues’-gallery of hypocrites is the president. One only needs to look at the calendar to see the impetus for his decision. His defenders will argue: “Well of course it’s political. That’s the nature of the beast. It’s still the right thing to do.” But if that’s true then why wasn’t it the right thing to do a year ago? Or two? Or – if not day one of his presidency, then at least the day it became clear his legislative agenda would be hopelessly blocked (day two)? Just last year he told the Spanish-language channel Univision that he couldn’t halt deportations through executive order. It’s true that he still hasn’t done so (this represents a change in DHS procedures, not an executive order), but again, why wait until now? More importantly, how many innocent kids were deported while Obama was waiting for the most politically advantageous moment to make his move?

This jockeying for Latino votes is shameless in its hypocrisy and breathtaking in the undisguised way it’s being carried out. All sides are to blame here; no hands are clean. And it’s most symptomatic of the depths to which American politics has sunk, where no good deed can be performed without first counting the votes that might result.

The hypocrites should be reminded that we-the-people are desperately seeking candidates willing to do the right thing for its own sake.

Doesn't know much about culture, but knows when it's going to hell in a handbasket.
View all posts by editor, facilitator, decider →
This entry was posted in New Post and tagged DREAM Act, immigration policy, Obama, politics, Romney, Rubio. Bookmark the permalink.