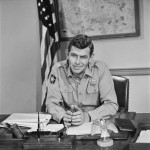 But he wasn’t just Sheriff Taylor and Lawyer Ben Matlock. He was, by all accounts and by all evidence, as nice a guy as he played on TV. Make no mistake though, he was a talented actor who could handle complex, even dark roles with aplomb.

Want proof? Check out his film debut, A Face in the Crowd (1957). His character was decidedly not a nice guy, while his acting was astoundingly good. Awesome film, highly recommended.

And that’s how I choose to remember Andy Griffith: an outstanding human being with understated yet undeniable talent. He’s a cornerstone of American culture who’ll be greatly missed but also always with us.

Doesn't know much about culture, but knows when it's going to hell in a handbasket.
View all posts by editor, facilitator, decider →
This entry was posted in Homepage and tagged Andy Griffith, RIP. Bookmark the permalink.