A belated birthday shoutout to the godfather of drug-addled journalism and hero to writers everywhere, Hunter Stockton Thomspon (July 18, 1937 – Februarly 20, 2005).

There’s little the Deconstruction can say about Hunter that hasn’t already been covered by the media, by Hollywood and by Hunter himself. Suffice it to say he opened a new world of American journalism and changed forever the way writers view themselves as characters in their own stories. He also forged a vital, lasting link between the written word and the possibilities of pharmacopeia.

With that in mind, we salute Hunter in the best way we know how – with a sweet sample of of his own outrageousness. Enjoy this short but definitive rejection letter, through which Hunter (it’s not signed by him, but who else could have written it?) lets a young fan know that his submission won’t be needed. 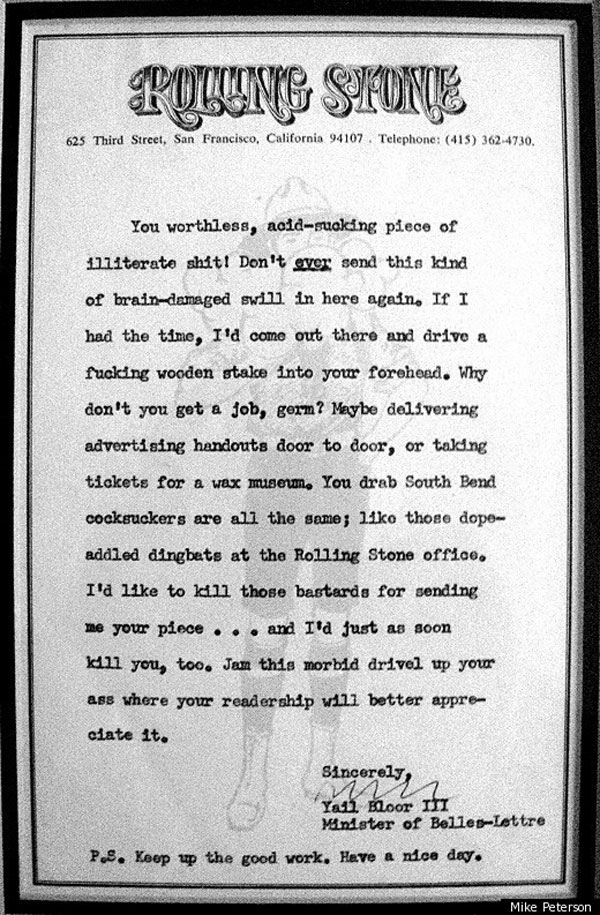 Doesn't know much about culture, but knows when it's going to hell in a handbasket.
View all posts by editor, facilitator, decider →
This entry was posted in New Post and tagged Hunter S. Thompson, Rolling Stone. Bookmark the permalink.