Only I can disenfranchise me 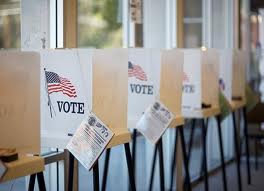 There is no compromise in the latter-day American political culture. Every side is convinced that they’re right, that the other side’s wrong, and that compromise equals betrayal. Lockstep conformity to ideology is the order of the day. It’s probably no coincidence that objective progress — or even the normal day-to-day business of governing — is frozen in place.

And that’s a shame because a little compromise would do us all some good. It would break some logjams and maybe clear the way for addressing more important issues.

One area where I recommend some compromise is (depending on how your ideology demands you frame it) voter suppression, or “protecting the integrity of elections.”

Thirty states currently have some sort of voter ID laws, which require the presentation of narrowly defined photo IDs to cast a ballot. Several more states have legislation in the pipeline, under debate, or under challenge.

There are also contentious efforts to close polling stations, to change polling hours, to limit access to absentee voting. Critics call this voter suppression and a raw attempt to manipulate turnout and results. Occasionally even the proponents of such efforts say the same (probably accidentally), like in June when Pennsylvania Republican House Majority Leader Mike Turzai said that state’s voter ID law was “going to allow Governor Romney to win the state of Pennsylvania.”

To me, voter suppression is one of the most unAmerican things imaginable. Those who engage in it will be judged by history, but I’m afraid that isn’t enough; it doesn’t help us now. The Justice Department has challenged some of it, but their record of success isn’t exactly encouraging. The chances are very high that we’ll go to the polls this November with the worst of the voter suppression laws on the books and being enforced.

You see, although they’ve made it harder for some of us to vote, they haven’t made it impossible for anyone to vote. It’s popular to compare these efforts to Jim Crow, but there are some important distinctions. The victims of Jim Crow, of the poll taxes and literacy tests, were effectively disenfranchised.

Nobody is going to disenfranchise me, not unless I let them.

So here is what I’m going to do. I’m going to stand in line to vote, no matter how long it takes. If they’ve closed down my polling station, I’m going to make some phone calls and find out where the new one is. If I don’t have a driver’s license I’m going to spend the time and the ten or twenty dollars it takes to get an ID they deem acceptable.

Maybe it’s not right that I have to do these things. Maybe in doing them I’m compromising my principles. But maybe they’re counting on my moral outrage and my unwillingness to compromise. Maybe they’re just counting on me being too lazy to jump through those hoops.

Either way, it comes down to this: I vote, or I don’t. If I don’t I can congratulate myself for not compromising.

But if I do maybe I can turn that compromise into a chance for real change.

Doesn't know much about culture, but knows when it's going to hell in a handbasket.
View all posts by editor, facilitator, decider →
This entry was posted in New Post and tagged compromise, election, politics, voter ID laws, voter suppression. Bookmark the permalink.

One Response to Only I can disenfranchise me