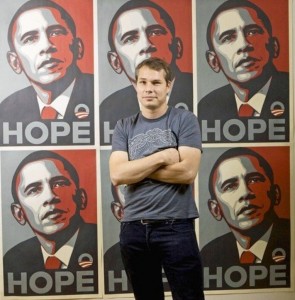 At the intersection of politics and pop culture we find Shepard Fairey and his iconic 2008 painting of Barack Obama, which one art critic said was the most effective political poster since Uncle Sam’s “I Want You.”

In a sardonic twist, that painting has now led to a criminal conviction for Shepard Fairey. Although this isn’t his first brush with the law (as a former street tagger, Fairey has numerous arrests for vandalism), it is by far his most high profile, and it leaves an unremitting blemish on his most famous work.

The trouble began almost immediately after the painting was converted to poster form by the Obama campaign. The Associated Press sued after recognizing the image as a copy of  a 2006 photograph for which they owned the copyright. Fairey claimed Fair Use but nevertheless settled the case out of court. In the course of the legal battle he admitted he’d provided false testimony and destroyed evidence, which led to his conviction last Friday. He was sentenced to probation, 300 hours of community service and a $25,000 fine.

Fairey’s quirky work has required the fair-use argument before. In the late eighties he created the odd, reportedly meaningless “Andre the Giant has a Posse” image that went viral (in the analog, offline way of those

days). Fairey says he was just experimenting with stencil-making, and happened to use a handy newspaper image of the outsized pro wrestler. Regardless, the image became insanely popular, particularly among skaters, and versions of it began appearing all along the East Coast. In 1994 Fairey was threatened with a copyright infringement suit by Vince McMahon’s 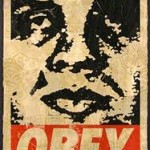 Titan Sports, which spurred him to change the image, ever so slightly. The “Obey Giant” is now digitally ubiquitous, yet many who are familiar with it aren’t aware of Andre’s, or even Shepard Fairey’s connection with it. Nevertheless, it’s been something of a profit center for him, even spinning off a clothing line.

Fairey says he’s happy to be done with the long drawn-out legal drama surrounding the Obama poster. He’s kept himself busy throughout, working on public exhibitions, playing himself on the Simpsons, and creating artwork for Neil Young’s most recent album. It’s interesting, though, that he finds his legal wrangling over just as campaigning for the 2012 elections are heating up. Will Shepard Fairey create another emblematic political poster? Maybe. But given past controversy, he probably shouldn’t expect the Obama campaign to come calling.

Doesn't know much about culture, but knows when it's going to hell in a handbasket.
View all posts by editor, facilitator, decider →
This entry was posted in New Post and tagged 2012 elections, Andre the Giant, Andre the Giant has a posse, Barack Obama, Hope Poster, Obey Giant, Shepard Fairey, Vince Mcmahon. Bookmark the permalink.