Pablo Neruda and the unquiet grave

In the wave-strike over unquiet stones
the brightness bursts and bears the rose
and the ring of water contracts to a cluster
to one drop of azure brine that falls.
O magnolia radiance breaking in spume,
magnetic voyager whose death flowers
and returns, eternal, to being and nothingness:
shattered brine, dazzling leap of the ocean.
Merged, you and I, my love, seal the silence
while the sea destroys its continual forms,
collapses its turrets of wildness and whiteness,
because in the weft of those unseen garments
of headlong water, and perpetual sand,
we bear the sole, relentless tenderness. – Pablo Neruda 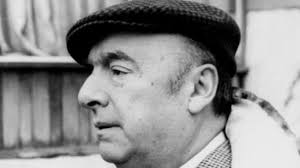 Pablo Neruda died nearly forty years ago. His death — mysterious, suspicious — has ever since been a metaphor for the wider and more heinous atrocities of the Pinochet regime that ruled Chile, Neruda’s home, from 1973 to 1990.

Neruda was a poet, author, diplomat, and the winner of the 1971 Nobel Prize for Literature. He was also an outspoken critic of despots, and a close friend of Salvador Allende, the Chilean president overthrown by Augusto Pinochet.

On September 11, 1973, with the presidential palace surrounded by Pinochet’s troops, and with explosions and gunfire clearly audible in the background, Allende took to the radio to bid farewell to Chile. He then committed suicide with an AK-47 rifle.

Eleven days later, Pablo Neruda was attempting to flee to Mexico, where he’d been granted asylum. For reasons that are still unclear, he was taken instead to the same clinic near his home on Isla Negra where he’d received cancer treatment. Friends and aides report he was well when admitted on Sept. 22nd. Early on the 23rd he told his driver that a doctor he’d never seen before had given him an injection in the abdomen. He developed a fever that afternoon. By evening he was dead.

Pinochet’s foes have called it murder ever since. Their case was bolstered more than a decade later, when former Chilean president Eduardo Frei Montalva died at the same clinic. Septic shock was cited as the official cause of death, but an investigation after the collapse of Pinochet’s dictatorship showed that Montalva had been slowly, methodically poisoned.

Is that what also happened to Neruda?

The answer to that question might be answered even as I write these words, for Pablo Neruda’s remains have just been exhumed.

The emphasis is on might because I fear that the poet’s rest is being disturbed needlessly. Isla Negra, where Neruda was buried, is intensely humid with wet, acidic soil. After four decades in that ground, it’s doubtful his body will yield definitive evidence.

We’ve talked before about exhumation (see here and here). I’ve opined that empathy and simple respect for the dead should stay the shovels in all but the most exceptional circumstances. I stand by that.

At the same time I understand that the history of “truth commissions” have been vital in healing societies progressing away from totalitarianism. I support the efforts of any such societies to follow the truth, no matter where it takes them.

I just don’t know if the exhumation of Pablo Neruda will offer any such truth. I suspect the result will be as ambiguous as the suspicions have always been.

Still, Pablo Neruda has already been brought up from his grave. What’s done is done. Whether good, or closure, or truth in any form comes from it, I can’t say. All I can do is hear Neruda himself, lamenting the loss of an old companion but writing words that might just as easily have applied to his own sad end:

So now he’s gone and I buried him,
and that’s all there is to it.

(from “A Dog Has Died” by Pablo Neruda)