Books are evolving (and not the way you think)

Plenty has been written about the quantum evolution we’ve witnessed in the world of publishing over the last ten or fifteen years. It’s true that a slim majority of books now in print are actually just that–in print; in a format that 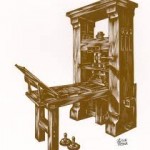 wouldn’t be unrecognizable to Herr Gutenberg himself. The momentum is on the side of the digital, however, with electronic books exploding in number and in distribution, and almost certain to overtake traditional print in the very short term.

That’s not what this article is about.

Tom Burtonwood is a British-born artist and educator living in Chicago, who helped pioneer the artistic adaption of the 3D printer. Three-dimensional printing is another new and growing technology that is poised to revolutionize vast swaths of modern industry. It’s not too much of a stretch to see its use in the arts. But publishing? Tom Burtonwood said why not.

He describes the creation of his accordion-style text-and-textured book, “Orihon” as a response to a call for submissions by the Center for Book and Paper at Chicago’s Columbia College. The Center was looking for innovative takes on the modern print-on-demand book. Burtonwood fired up his 3D printer, and met that challenge. 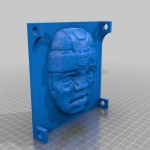 The interior of the book is a series

of raised relief images, including an Olmec-style head, a lion, an ogre, and more. The front and back covers are textual, with a description of the “publication” process, a Creative Commons license, and a list of other works by the artist.

Burtonwood says that his use of the multi-hinged accordion design was a necessary compromise, due to the bulkiness of the pages. He’s intrigued with the idea of creating a traditionally bound book, though, and is already exploring ways to make that happen.

And well he should. Orihon is an exciting prototype and a compelling piece of art, but it’s not quite a book—yet. What we have here, maybe, is a paradigm shift in its infancy. If 3D-printed books are destined to be a novelty, then that paradigm would have died in its crib. But if Burtonwood and others can find a viable, marketable way to mate book publishing with 3D printing, then e-publishing will have a run for its money in revolutionizing how we read books in the 21st century.

Doesn't know much about culture, but knows when it's going to hell in a handbasket.
View all posts by editor, facilitator, decider →
This entry was posted in New Post and tagged Art, books, Columbia College, e-books, Gutenberg press, printing, publishing, Tim Burtonwood, what is culture?. Bookmark the permalink.