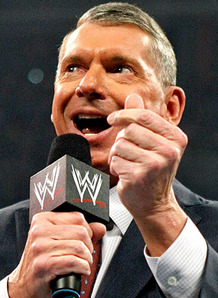 How was your day, last Friday? Was it better than WWE founder Vince McMahon’s? When McMahon woke up on May 16th, he was a billionaire. When he (presumably) drank himself to sleep that night, he wasn’t.

I had a $20 bill fall out of my wallet once. That hurt. And once I dropped a little over fifty bucks on scratch-off lottery tickets, without a thing to show for it. Mister McMahon, it’s reported, lost about $350 million in the course of one day.

So what happened? McMahon’s entertainment empire, cornerstoned firmly in the “wrestling” realm, is losing fans at precisely the same time it’s investing heavily in streaming media, and in a new deal with NBCUniversal for the Raw and Smackdown broadcast shows. The online services have picked up a paltry 700,000 subscribers and have been operating at a loss since launch. And the take from the TV shows ended up being less than half of even the most conservative projections. The result was a 40% loss in stock value before close of market on Friday, and a roundhouse punch to Vince McMahon’s bottom line. 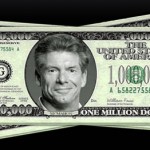 Of course, the man’s still worth about $750 million. We probably don’t need to weep for him.

Say what you want about entertainment wrestling (what else would you call it?), or McMahon’s outsized personality, or his wife’s avaricious political ambitions. You can even make a pretty reasonable argument that Vince McMahon and the WWE offer nothing constructive to society, and that what happened on Friday was some long-overdue comeuppance. Fake wrestling does nothing for me, so I might be inclined to agree with you.

WWE fans, though—dwindling though they may be—would probably beg to differ. And since they’re the ones voting with their dollars (or lack thereof) then I suppose theirs are the only opinions that matter.

I think I’m giving McMahon some slack here, probably much more than I’d be tempted to otherwise. Because although his strange, strange enterprise doesn’t thrill me in of itself, it has launched some interesting careers. 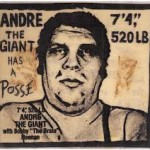 Some of those I shake my head at (there’s no accounting for taste). But in other cases, one in particular, I think Vince McMahon’s talent as a talent scout has done us all a great service.

In 1987 one of the most classic, enduringly enjoyable movies of all time was made. I don’t think it would have been half as good, though, if some years earlier Vince McMahon hadn’t recognized and rewarded the towering potential of one awesomely talented gentle giant.

Doesn't know much about culture, but knows when it's going to hell in a handbasket.
View all posts by editor, facilitator, decider →
This entry was posted in New Post and tagged Andre the Giant, Vince Mcmahon, WWE. Bookmark the permalink.