illustrates an entire tragicomic spectrum of unhappy, unintended con-sequences. More aptly, it demonstrates the lowest of the low: infantile exes who aim to shame, and the profit-blinded thugs who give them the platforms for doing so. Both categories are beneath contempt, and I hope we all can agree that they can and should be stamped out.

But back to the consequences unintended—how did we come to a place where such a hurtful phenomenon could be so widespread? I suppose there have been similar instances, probably mostly isolated ones, for as long as there has been sexuality and ways of commemorating it. But it wasn’t until we all began carrying cameras everywhere, all the time; and we all had access to vast and instant sharing networks, that this thing became an epidemic.

I’ve heard it argued also that a more intimate aspect of culture, sneeringly called the ‘hookup culture,’ plays an equally culpable role. I won’t go there, it smells too much like victim-blaming. In whatever way those pictures are generated (ways that are patently not my business) the only thing that the wronged party in one of these scenarios is guilty of is trusting the wrong person. And we’ve all been guilty of that, haven’t we?

These are positive developments, no? Well…we are dealing with the law of unintended consequences here, and no one triggers that law quite like lawmakers who don’t really understand the issues and the technology under their purview.

So that’s why eleven plaintiffs, including the ACLU and the Association of American Publishers, have filed suit against Arizona House Bill 2515, effective as of July, calling its prohibition on sharing private or intimate images overbroad and unconstitutional.

Why? Here’s the operative text: It is unlawful to intentionally disclose, display, distribute, publish, advertise or offer a photograph, videotape, film or digital recording of another person in a state of nudity or engaged in a sexual act if the person knows or should have known that the depicted person has not consented to the disclosure.

That seems perfectly reasonable—spot on, in fact—until the plaintiffs point out that it would criminalize one of the most iconic images of the last half century. It would also make it a felony to publish the most obvious and relevant photos alongside an article on public breastfeeding. It rises from the level of nobly intended civil 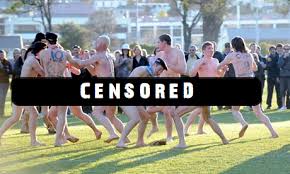 protection, to the unwanted heights of censorship and prior restraint.

It is, in other words, a hell of a conundrum, and it’s one that is probably applicable to the anti-revenge-porn laws that have been enacted nationwide. On the one hand, there absolutely should be criminal penalties for jilted exes and sleezy revenge-site operators.

On the other hand, there absolutely shouldn’t be censorship. Ever.

In an age when it’s difficult to get legislators at any level to agree on anything, much less act, it’s something of a miracle that these laws even exist. It’ll take another, trickier kind of miracle to get them fixed to target only the bad, and leave be the good.

So fingers crossed for that miracle. Without it someone will lose, someone who did nothing to deserve that fate. That fate, of course, is the most common unintended consequence of them all.