Is the art world wracked by fraud?

Seems like a dirty little secret of the art world, one that’s probably been whispered about since art became a commodity and collections became investments, is breaking out into the open. Dealers, curators, and those investment-level collectors probably aren’t sanguine about the rest of us being privy to this, but the (startling) word is that more than 50 percent of traded artwork is now said to be faked, forged, or at least misattributed.

Which maybe shouldn’t be as surprising as it so painfully is. After all, the time-honored method of art authentication is expert review—that is, the acknowledged experts of a given artist, period, or style would examine a piece and render an informed opinion as to the accuracy—or dubiousness—of the attribution in question. Leaving aside for a moment the inherent weakness of visual-only analyses, this model also arguably places a bit too much onus on the authority of experts, and leaves too little opportunity to review their methods and conclusions. Add into that the inevitable conflicts of interest—remember that the authenticators are usually being paid by a party with a vested interest in the outcome—and you’ve got a system rife for gaming.

How long this has been going on is anyone’s guess. Art history tells us that practice of signing artwork dates from about the 15th century, and that the art of forging artists’ signatures was perfected almost immediately

thereafter. More recent scandalous behavior includes the winked-at custom of wealthy donors offloading suspected fakes (or confirmed ones) from their collections onto museums, and taking a healthy tax deduction in the process. The museums, it’s said, are perfectly aware of the scam but play along so as to not alienate their high-powered patrons. As a result the ratio of forgeries is apparently even higher in museum collections, perhaps approaching 70 or 80 percent, although the bulk of these are in permanent storage, and never displayed.

The backlash against the expert-review paradigm is one of the reasons this story is breaking open, and it has led to more widespread acceptance of the logical alternative: scientific review. Indeed, it’s material analysis (testing paints and canvases to determine if they’re consistent with the attributed period), along with the use of high-tech, multi-spectrum examination tools that has identified many a fake that had long been widely accepted as genuine.

Which might lead one to think that the side of truth might be winning out, but instead what we have here is a classic arms race. Art forgers have long been accustomed to procuring properly aged canvases, and to mixing 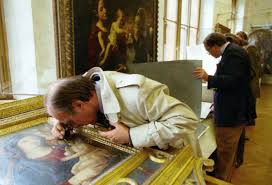 period-consistent pigments, and you can be sure they’re just as busy learning to defeat whatever new authentication methods that are coming on line. The incentives for doing so are counted in the hundreds of millions of dollars.

Art forgery, then, is a simple and very predictable matter of economics. It became all but inevitable in tandem with the commoditization of aesthetics. It’ll continue—and flourish—as long as the collection of artwork remains the playground of the rich.

In that light it’s hard to work up much sympathy, or even undetached interest, in the point-counterpoint of art forgery and art-forgery detection. It almost feels like a game being played out in another world, even for those of us who aren’t rich, but still love art.

But here’s the thing. There’s a lot of wonderful art out there, created contemporaneously by incredibly talented artists…that’s insanely affordable and certainly not being forged. That’s how we regular folk get in the game: by

supporting regular artists. By becoming patrons and collectors in our own modest but still very real and very committed way.

And if by some weird quirk of fate you find yourself in the possession of a fake, don’t lose your cool. Just ask yourself the questions you’d ask with any art: Do I like it? Does it speak to me? Or does it at least pull together this room? If the answer is yes, then guess what? It’s art. Hang it, let yourself love it, and let yourself also forget the worries of provenance and attribution. Those are concerns for a different class of collector than you. You’re the better sort—the kind that’s in it, just for the art.

Doesn't know much about culture, but knows when it's going to hell in a handbasket.
View all posts by editor, facilitator, decider →
This entry was posted in Homepage and tagged Art, art forgery, Art history, What is art?. Bookmark the permalink.