History in the margins 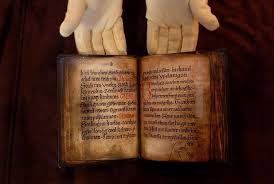 It might be the bane of librarians, but after a certain interval marginalia becomes history itself.

In this case the tome is the Black Book of Carmarthen (so named for its distinctive black binding), and as the oldest known manuscript written in the Welsh language it is the cream of the collection of the Library of Wales. Believed to have been written in about the middle of the 13th century–fascinatingly, it seems to have been written over the course of years by a single scribe, whose handwriting visibly alters as he ages—it’s a collection of stories and poems themselves dating from the Dark Ages. It includes one of the earliest known recountings of the Arthurian legend, with a particular emphasis on Merlin, therein called by the Welsh, “Myrddin.”

Already a trove, the book has recently revealed more treasures, having been subjected to high-res imaging and

UV light. It’s become apparent that throughout its long life, the book has been constantly amended by owners and readers, with commentary, verse, even doodles added to the margins. It is believed that the additions were assiduously scrubbed away, probably with pumice, sometime in the 16th century. But enough ink had seeped into the vellum that, although it was invisible to the naked eye, it proved to uncoverable with modern technology. Translation and study are ongoing, but thus far researches have found images of fish 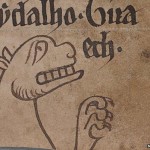 and human faces (the first glimpses of which they described as “scary“), as well as bits of previously unknown Welsh verse.

All of which probably won’t rehabilitate the reputation of margin scribblers, at least not in the eyes of the keepers of our literary fidelity. Time itself can only do that. And while I’d never suggest that a few decade’s worth of aging will vindicate you for writing in your library book, I will say that I like buying old books myself; and while none my books, nor their marginalia, approach the venerability or importance of the Black Book’s, I still look for marginalia in every book I buy, immediately upon purchase. And when I find it, I’m always delighted.

Doesn't know much about culture, but knows when it's going to hell in a handbasket.
View all posts by editor, facilitator, decider →
This entry was posted in Homepage and tagged books, culture, history, marginalia, Michele Smarty, what is culture?, Words I Seek. Bookmark the permalink.