Too many to remember, too execrable to forget 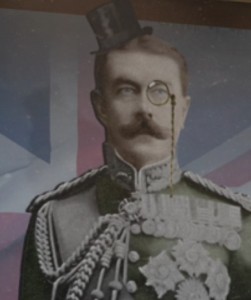 Hat tip and thanks to online comedy purveyors Above Average for providing a timely if flippant reminder that history abounds with calamitous jackasses.

The debut episode of their edifyingly educational web series, Forgotten Assholes of History is up (as well as embedded below); in it they shine the light upon the first of hopefully many wrongheaded twits who bulldozed their way through world events, yet have been eclipsed from their rightful disdain by heavier (s)hitters such as Hitler, Stalin, and “Known Unknowns” Rumsfeld. Exhibit A is Herbert, Lord Kitchener, an early architect of the concept of total war, and inventor of that veddy unBritish apparatus, the concentration camp. What an asshole.

The epithet is so very apt, and the mocking so deservedly needful. There are, as I said, no shortage of nearly forgotten cretins just like this, who need to be recalled and reviled. They’re assholes because to attribute some finer distinction to them, to call them calculatingly evil, for example, is to give them far too much credit. Political philosopher Hannah Arendt taught us that gray, boring little men commit atrocities not for the sake of passion, but rather through the lack of it. She coined the spot-on phrase the banality of evil to describe the destruction that comes not through machination, but through machine-like bureaucracy.

Kitchener was an asshole who sowed suffering and wasted lives because he never thought twice about results or repercussions. He didn’t know any better, but he surely should have—and that’s as good a definition for ‘asshole’ as I can think of. All credit to Above Average for giving us the chance to laugh at him and learn from him. And let us take his measure, for assholes just like him teem and they walk amongst us today.

Doesn't know much about culture, but knows when it's going to hell in a handbasket.
View all posts by editor, facilitator, decider →
This entry was posted in Homepage and tagged Above Average, assholes, cretins, Forgotten Assholes of History, Kitchener, shitheads. Bookmark the permalink.