An author’s self-defense, or social-media suicide?

The online indie-author milieu lit up this weekend as a one-star Goodreads review turned into viral humiliation for self-published author Dylan Saccoccio. A less charitable observer might say Saccoccio’s imploded reputation is entirely self-inflicted. A more constructive one might find valuable lessons here for us all.

It all started on Friday, with a heartfelt albeit far from rave review by Goodread member Cait, of Saccoccio’s fantasy novel, The Tale of Onora: The Boy and the Peddler of Death:

There you have it. Not a lot of detail, little in the way of examples provided (although the case can be made that the title itself is an example of ‘wordy and pretentious’)—but other than the arguably injudicious use of the word ‘loathe,’ not exactly venomous. It’s a one-star review. No author likes to get them, but almost every author gets them nonetheless. The wisest writer scans them for actionable criticism, and incorporates or discards that counsel as he or she sees fit. The minimally wise writer harrumphs, gnashes teeth, whatever—but does not engage. And then we have Dylan:

Dylan is, as he says, an indie author. Many of us are. We’re fortunate to live in an age where independent authorship and publication is not only possible, but relatively easy. The other side of that coin is that our field is crowded beyond belief. This means that in order to stand out from the crowd an author (or artist, or musician—this is the era of the indie creator) must not only be the master of his or her craft, but also a master of publicity and self-promotion. The ways to go about that are legion, and I haven’t the space here to even get started on the how-tos. But the don’t-evers are comparably pithy; right up there with do not engage with one-star reviews are the canonical don’t whine and don’t ask for pity.

There were swift and cutting responses to Dylan’s retort—some troll-like, but a lot more were desperately trying to help Dylan help himself: Don’t do this. No good can come from this. If he’d listened and pulled himself back from the brink we wouldn’t be deconstructing his folly now. But it was like he couldn’t stop himself:

Defensiveness is one thing. This…rises to another level entirely. And it went on and on, dozens of entries. Sometime in the last 24 hours or so Dylan seems to have had a moment of clarity, and deleted everything. But here’s the thing about the internet, of which you and I are painfully aware but of which Dylan Saccoccio seems startlingly ignorant: nothing goes away. Not only is his meltdown epically viral, it’s also archived.

I’ve linked to the entire thread, check it out if you like. I can’t possibly do justice here to the lengths of depths of this author’s ongoing, self-immolating tirade. Just one more, to illustrate his shift from passive-aggressively battling his detractors, to his monumental proclamation that THIS BOOK is the barely allegorical salvation of mankind, and that anyone pathological enough to give it a one-star review must surely be on the side of the Great Deceiver: 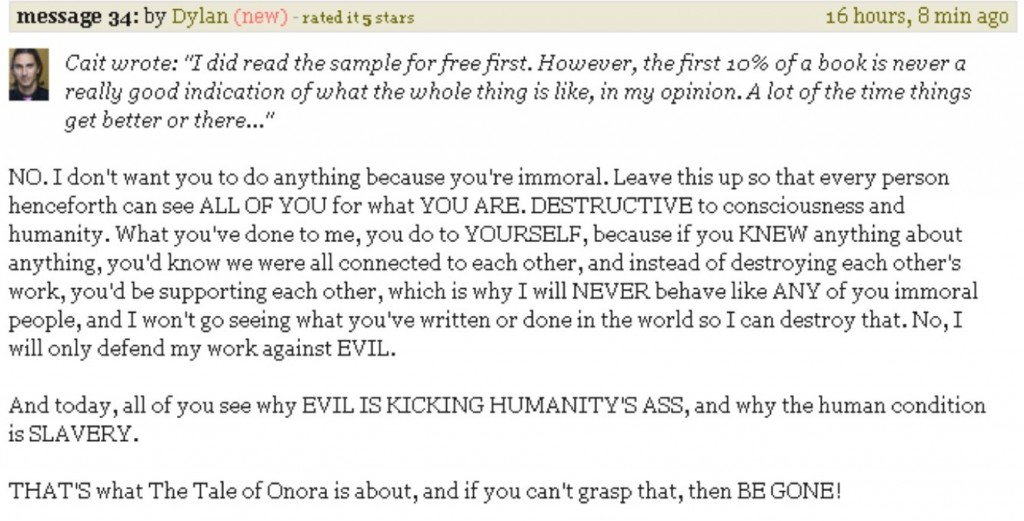 Whew. Though I have my doubts that our fate as a species is dependent on one particular self-published fantasy novel, I’ll admit that I haven’t read it and should therefore withhold judgment. I have read (or tried to read) the sneak-peek available on Amazon—wordy and pretentious are pretty spot-on descriptors. Throw in not-very-well edited, and we do not have a recipe for literary success.

But these are of course my opinions. The original one-star review was Cait’s opinion. We’re just as entitled to ours as Dylan Saccoccio is entitled to his, which is apparently that The Tale of Onora is one for the ages. I have no doubt that there are plenty of readers who agree with him, or at least don’t find his work as unreadable as Cait and I.

Readers of that sort could have and probably would have found their way to Mr. Saccoccio’s tome, and all would have been well. All might very possibly still be well. But much more likely, Dylan Saccoccio will, for a while at least, be defined by this strange and eminently avoidable episode, and an untold number of readers who might have otherwise given him a try will instead be completely turned off by his infantalism, and avoid him like the plague.

As an indie author I find in all of this an invaluable lesson, although I like to think it’s one I didn’t really need to learn. I’ve had my share of non-rave reviews. Most of them offered thoughtful critiques and I had to admit, in my own moment of clarity, they had valid points. I think I learned from all of them, and maybe became a somewhat better writer because of it. Conversely, I’ve had a few reviews that were downright mean. So be it. It’s a cruel world.

I’m not sure how tempted I was, in any of those situations, to respond. All I know is I never did. I knew instinctively, as most of us do, that a response would serve no useful purpose.

You might not be an independent author, artist, or musician, but I’m certain there’s a useful lesson here for you as well. The internet has a long memory, maybe even an indefinite one, and it does not suffer fools gladly. If you act the fool online, count on being pegged as one—maybe for the rest of your life and beyond.

Doesn't know much about culture, but knows when it's going to hell in a handbasket.
View all posts by editor, facilitator, decider →
This entry was posted in New Post and tagged writing. Bookmark the permalink.

4 Responses to An author’s self-defense, or social-media suicide?