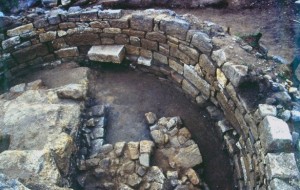 Two thousand, three hundred and thirty-eight (-ish) years after his death, Aristotle’s final resting place might have been found.

Greek archaeologists excavating in Stagira, Macedonia (Aristotle’s birthplace) have uncovered a semi-circular temple that, they believe, served as the philosopher’s funerary monument. Aristotle died in 322 BCE in Chalcis, on the Greek isle of Euboea, but it’s now believed that his ashes were later moved to Stagira, with the now-uncovered monument built as

both a tomb and temple.

Aristotle is usually listed among the three classical philosophers—Plato, Socrates, and Aristotle—who are credited as the founders of Western reason and thought. What’s important to remember though (these being times when the study of philosophy is equated with dissolution and waste) is that to the Hellenistic mind, the discipline of philosophy included the natural sciences, medicine, mathematics, and music. In founding the field of philosophy, Plato, Socrates, and Aristotle may have also invented precursors to the modern scientific method.

Aristotle’s own individual impact on Western history cannot be overstated; as the childhood tutor of Alexander the Great he directly influenced the reach and scope of the Macedonian empire, thereby indirectly influencing the rise of Ptolemaic Egypt, the Seleucid empire in Central Asia, and the Greek and Roman successor states throughout Europe. It’s not a stretch to say that Aristotle continues to influence not just philosophy, but also political realities, down to the present day.

Given all this, might we not consider the discovery of Aristotle’s tomb as not only an archaeological curiosity, but perhaps also as a focus for veneration, maybe even pilgrimage, for now and for all time?

Doesn't know much about culture, but knows when it's going to hell in a handbasket.
View all posts by editor, facilitator, decider →
This entry was posted in New Post and tagged archaeology, Aristotle, history, philosophy. Bookmark the permalink.