The clowns bring a message

Great civilizations tend to be visited by great prophets, when they begin to topple or go astray. Sometimes the wise words are heeded and crisis is averted. More often the messengers are ignored and the terminal waves come crashing over.

We should be wary, then—especially wary, now that the oracles walk among us, and they deign not to warn us with oratory but rather with their chilling nighttime leering. 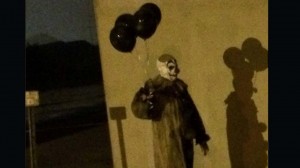 This is entirely right and good, in accordance with the dire message they carry. The scaramouche form they take is the message, or at least the subject line. They’re appealing directly to your and my atavistic fear reflex, as triggered by the panoply that starts with greasepaint and winds on down to their oversized shoes.

Because what else is there to fear these dark days, besides clowns on the lurk? That’s right, it’s That Candidate. You know the one: the one you loathe and fear so much, you know beyond doubting that That Candidate’s ascension can spell only doom for you and all you hold dear. 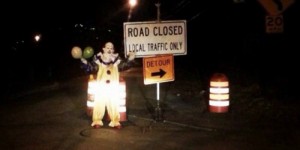 So what we have here is a coast-to-coast metaphor, spotted everywhere, apparently; deliberately or otherwise reminding us that we’ve got a lizard brain buried way back there that’s not as easy to ignore as we’d like. Lizard Brain reacts most strongly to fear, and in the grips of a strong enough dose of it, Lizard Brain is ready and able to take the wheel. Scare it badly enough and it wouldn’t hesitate to steer us all right into the ditch.

But there’s a corollary message along with the one about clowns and fear. It’s this: Clowns haven’t always equaled fear. Once upon a time they meant delight. Seems like it’s only in living memory that they somehow morphed into those things you hatefully fear deep down in your gut.

It’s been a bit longer that the political class has also been so deeply despised, but once again, it hasn’t always been so. Nor must it always be.

The best we’ve ever been served (and maybe this is an idealized past, but it was the ideal) was when there was no per se political class. Office holders at all levels, as foreseen and designed by Tom Jefferson, were just patriotic citizens, taking their turns at the necessary for a few years, before handing it off to fresh and similarly motivated patriots and going back to their lives. Seems to me that our turn for the worse might have started when we got away from that, and we allowed politics to be become a permanent and lucrative profession.

A few followers of That Candidate, or maybe it was you, were more right than they knew when they began screaming that it’s a revolution we need in this country. Except it’s not one where we hurt each other, or are even uncivil. It’s one where we use the powers granted to us in our national charter, to turn our political system back into something we can be proud of.

Because when we let it get to the point where the grandest and most consequential ritual of our democracy becomes the stuff of our nightmares, we’ve all become clowns.

Doesn't know much about culture, but knows when it's going to hell in a handbasket.
View all posts by editor, facilitator, decider →
This entry was posted in New Post and tagged clowns. Bookmark the permalink.