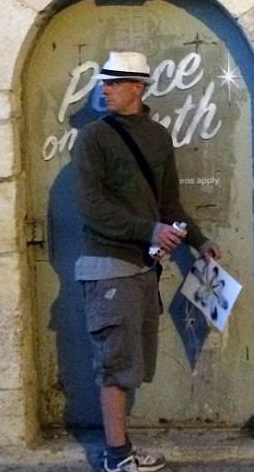 It’s probably a little more common to snap a credible picture of Nessie than it is to catch the world’s most elusive street artist in action. But a British tourist in Bethlehem thinks that’s just what he’s done.

The photo to the left was captured last week by Jason Stellios of Essex, near a Banksy-sponsored project which is said to mark the anniversary of the creation of the modern state of Israel. Stellios says that at the time he didn’t recognize much significance in the picture he took—just another cargo-shorts-wearing, middle-aged stencil spray-painter. But in the following days, when he learned that the grotto-artwork (“Peace on Earth *terms and conditions apply”) now features prominently on the landing page of Banksy’s website, it occurred to him that he might have captured something extraordinary. 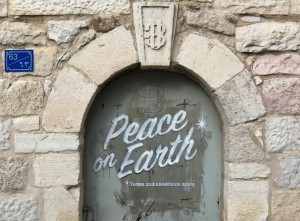 Well, maybe. But Banksy has been notably adept to date at avoiding identification. Should we believe that one lucky tourist put an end to that, in broad daylight, with the man of mystery himself glancing furtively over his shoulder and looking for all the world like Anthony Bourdain starring in a spy-spoof? Say it ain’t so, 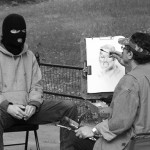 Banksy. Say it ain’t so.

Doesn't know much about culture, but knows when it's going to hell in a handbasket.
View all posts by editor, facilitator, decider →
This entry was posted in New Post and tagged Banksy, misdirection, What is art?. Bookmark the permalink.