Sasha Matthews for the copyright win

In theory, American copyright laws are 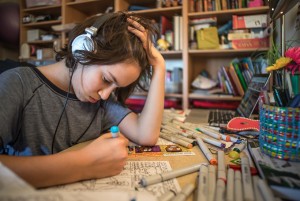 among the most creator-friendly in the world: in a nutshell, if you conceive it, and if you preserve it in a durable format, it belongs to you, under aegis of  U.S. jurisprudence, for as long as you’re alive (what happens after that is a bit murkier).

That doesn’t stop certain scalliwags from pulling every string they can to separate artists from their rightful intellectual property—the more vulnerable the artist, the more at risk they are to manipulation. And, some scalliwags might suppose, the most vulnerable, easy-to-manipulate artists are probably the youngest ones, right?

Not on Sasha Matthews‘s watch.

Sasha is a 13-year-old New York cartoonist, already well established and on her way to super-stardom. She was working on a submission late last year for the Scholastic Arts and Writing Awards—had spent considerable time on her submission package, in fact—when she noticed some troubling verbiage in the contest’s rules:

The student irrevocably grants an assignment transferring…all rights, title, and interest (including all copyrights) in and to the submitted work (‘Work’), such that the Work, and all rights relating to the Work, shall be the exclusive property of the Alliance.

Sasha Matthews took a stand. She not only cancelled her submission, she also called out the piratical policy through her medium of choice (as we’re railing about copyrights, it’s bad enough I lifted her photo without due process; I won’t do the same with her cartoon. Click here to see it in all its glory).

At last report, Scholastic Awards says they are considering revising their copyright policy.

Regardless of that outcome, artists, writers, and creators of every stripe owe this cartoonist a debt of gratitude. Thanks for having our back, Sasha.

Doesn't know much about culture, but knows when it's going to hell in a handbasket.
View all posts by editor, facilitator, decider →
This entry was posted in New Post and tagged copyright, copyright infringement, Sasha Matthews, Scholastic Awards. Bookmark the permalink.