The way of no attachments 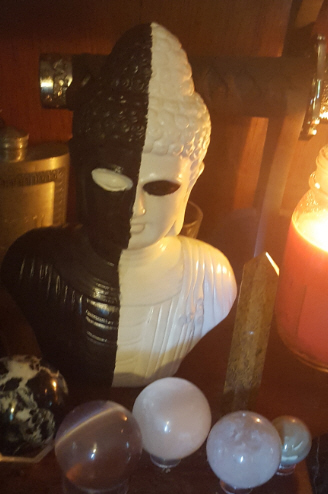 at Deconstruction Central; perhaps you’ve noticed. There may or may not be a reasonable explanation for this…I guess it all depends on your definition of reasonable. I might partially blame it on a sort of paralysis born of these strange and swirling times of ours. What commentary can you make on culture, when the culture seems to have gone mad? And what can you say about art when art is failing to save us?

Oh, but those excuses ring hollow, even to me. So I’ll say just this: I took some time off to regroup and decompress. I suppose I’m nearly there.

In lieu of anything insightful to say, then, p’haps I can just share with you a glimpse of this little project that occupied a bit of my time this week past? The missus and the child were kind enough to obtain for me (as part of my massive and much-appreciated Fathers Day haul) an unpainted Buddha ceramic. It was a veritable blank slate, in a way that I think Siddhartha himself would have appreciated. I opted to go a strange route with it, and I think he might have been good with that too.

Is it an unwarranted mixing of the Eastern paradigms? Have I taken Shakyamuni down the path of the Tao, without his express approval? Maybe. But sometimes paradigm-jacking isn’t just acceptable, sometimes it’s called for. Sometimes you just gotta shake things up.

If you should meet Buddha on the road – give him my best, and tell him I said so.

Doesn't know much about culture, but knows when it's going to hell in a handbasket.
View all posts by editor, facilitator, decider →
This entry was posted in New Post. Bookmark the permalink.