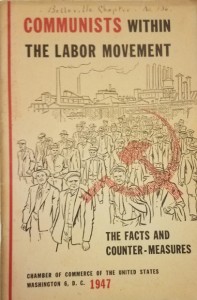 If you’re a worker, today’s your day. Labor Day is more than just the unofficial end of summer—it’s the annual recognition of the irreplaceable role that callused hands and dripping sweat and unyielding grit have played in building our civilization. So today’s your day: enjoy your acclamation.

Tomorrow—get your ass back on the line.

Sparse celebration is about all we can expect, because that’s all the paymasters are willing to give. Like everything about the labor movement it has to be demanded in order for it to be received.

The policies of the present administration, not to mention those in conservative state legislatures all across the country, seem to have labor on its back heels. From anti-union right-to-work laws, to tax policy favoring the rich at the expense of working families, it feels as though prospects have never been darker for the foundational class of American producers.

That’s an illusion, though. Suppression from above is hardly a fresh phenomenon—what we’re seeing today is a culmination rather than a new development.

That pamphlet above dates from 1947; an eyeblink, really, after the industrial “arsenal of democracy” was mobilized to save the world. Workers were seeking a collective share of the promised peace dividend, and the Chamber of Commerce, clearly, was not having it.

So that was just an early example of the demonization of labor, but it was hardly the last. The same pols and pundits who pay lip service to the nobility of the individual worker—you’ll hear plenty of that today—sow distrust and discord when those workers collectivize and seek strength through their numbers. So it has ever been, so it will ever be.

The only answer to that, from a labor standpoint, is to stay strong and keep on keeping on. Remember that nothing, including your own dignity, has been given; you’ve had to claim it. You’ll have to continue doing that to beat back the current attacks.

This includes staying informed and getting engaged. It means not buying into the politics of divisiveness, and not voting against your own interests. It means looking beyond the present frays to a brighter future that you, and only you, will create for yourself and your family.

Industrial Workers of the World

Doesn't know much about culture, but knows when it's going to hell in a handbasket.
View all posts by editor, facilitator, decider →
This entry was posted in New Post and tagged Labor Day. Bookmark the permalink.