Banksy’s latest: The hype is strong with this one 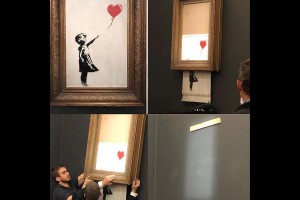 Oh, come on. This is just too much.

If you haven’t yet heard, you soon will. An event went down yesterday at Sotheby’s in London that will surely be part of art-world lore forevermore. “Girl With Balloon,” one of the most recognizable works by the enigmatic street artist Banksy, was on the block and had just sold for a cool £1.02 million ($1,340,000). Moments after the gavel came down the piece self-destructed. It fed itself through a shredder apparently hidden in the lower edge of the frame. Banksy, who might have been in attendance, and possibly remotely triggered the spectacle, posted a photo of it on Instagram with the caption “Going, going, gone….”

Sotheby’s denies collaboration and foreknowledge. A senior director for the auction firm, Alex Branczik said, “It appears we just got Banksy’ed.” The as-yet unidentified buyer hasn’t commented, and it isn’t even clear that he or she would be now obligated to complete the sale. They’d be advised to consider their options carefully, though: some appraisers are saying that the value of the newly segmented painting instantly increased by at least 50 percent.

So there’s likely to be at least one winner to come out of this conspicuous prank. Two, if you factor in the ballooning (so to speak) of the Banksy brand. The losers? Any of us credulous to take this episode at face value.

A shredder hidden in the frame? Really? And Sotheby’s never noticed? Either they’re extraordinarily bad at their pre-auction due diligence, or they’re lying through their teeth.

And as for Banksy—what the hell was gained here? Seems to me a Banksy prank used to serve a higher purpose. Banksy’s art had a message, and all the unexpected ways Banksy sneaked art into our consciousness were central to that message. Banksy pranks were non-lethal rounds fired in the street-level skirmishes of the social revolution.

Does even Banksy think that’s what happened last night? Or does Banksy recognize, as we all should, that it was just self-serving hype?

Doesn't know much about culture, but knows when it's going to hell in a handbasket.
View all posts by editor, facilitator, decider →
This entry was posted in New Post and tagged Art, Banksy, bullshit, Girl With Balloon, Sotheby's, street art. Bookmark the permalink.