My ballot speaks for me 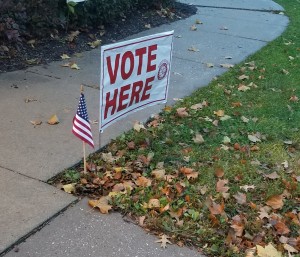 I voted today. Could’ve done it earlier; could’ve dodged the crowds, could’ve filled out a ballot at home and mailed it in at my leisure. These are valid choices, and if they were yours I salute them and you.

But I enjoy the semi-ceremony of waiting until the appointed day, of visiting the neighborhood polling place, of casting my ballot in this strangely regimented way. I enjoy greeting and thanking the volunteers, of shuffling first through this line and then that one, then finally secluding myself in that three-quarters way, with the patriot-themed curtains that put the “secret” in secret ballot.

A republic votes, and it seems to me that the more honor and dignity it bestows on the process, the more precious that process becomes. Citizens and senators alike voted in the old Roman Republic (before a populist dictator pissed all over that), in a way that wasn’t just a civic function, it was a religious act. We can argue in due course about the virtue and place of religiosity in the public forum, but for good or ill that invasion has already taken place. Maybe a positive outcome might be to lend some spiritual fervor to the responsibilities of citizenship. Maybe then more of us might participate.

Because the sad fact is, no matter the hue and outcry, no matter the hype, we’ll be lucky if half the electorate casts a vote before polls close today. It makes a mockery of the otherwise valid issues of voter suppression, of fraud, of the merits of showing identification…of the whole sordid history of suffrage and suffering and of fighting for the right to vote. In too many respects those who marched and fought and died for this right fought for nothing, when we consider it’s voter apathy that’s winning the battle. That’s unforgivable, and it has to change.

We’re no Rome, when it comes to the mechanics of our vote. It makes no sense that it happens on a Tuesday, a workday for most of us. And it makes no sense that voter registration is a distinct process, something to tend to and to very often stress over, when our status as citizens should be registration enough. These are barriers to voting, in other words, and although they should be knocked down, they’re with us for now, for the foreseeable future. But they are by no means insurmountable barriers—ask any of we 30 or 40 or 48 percent who turned out this cycle. We chose to vote, and in so doing we resolved to work our way round any barriers that might come  between us and the ballot box.

So I’d urge that literally silent majority, the eligible non-voters, to reject their own apathy, to overcome all those barriers, and to see days like this as I do, as the high holy days of democracy.

We don’t often ask, as JFK urged us to, what we can do for our country. So maybe it’s time our country instead demands: Your minimum duty as an American is to participate on these infrequent Tuesdays, to speak your piece by way of the ballot box. So do it. Vote.

Doesn't know much about culture, but knows when it's going to hell in a handbasket.
View all posts by editor, facilitator, decider →
This entry was posted in Homepage and tagged Election 2018. Bookmark the permalink.