AI-generated art as an economic commentary 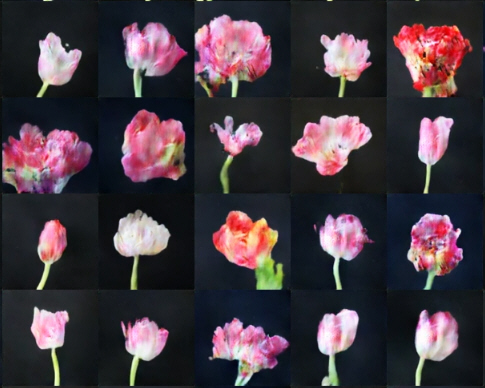 Imagine if you will an algorithm, an AI, employed in the creation of chimerical floral forms—all as a dual exegesis on one of the world’s first economic bubbles, and one of its most recent.

And if that’s all too heady for your imagination, then chillax, you needn’t conceptualize it; it’s an actual creation (in the form of a video installation), designed and presented by London-based machine-learning artist, Anna Ridler.

It’s called Mosaic Virus, an evolving animation of an array of pseudo-tulips. They look like they could be cultivated variations, for the most part, but none have ever existed in nature…and some of them, occasionally, mutate into far-out formations that could never grace this earth.

Why? The AI that paints and repaints the flowers, that governs their growth, is slaved to the sine-like fluctuations of the bitcoin market—the crypto-currency that’s busy creating a few fortunes, but mostly draining away thousands of others. 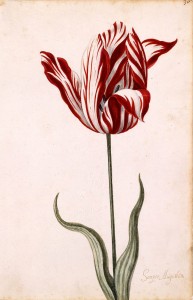 Why again? Because this all hearkens back to a much earlier bubble, arguably the world’s first.

“Tulip Mania” was the investing and collecting craze that overcame Europe in the 1630s. Less than a half-century after the tulip flower was introduced from Ottoman Turkey, it became the target of an unhinged buying binge, pumping up prices until the cost of a single bulb might surpass 10 years of wages for an average worker. Much of this was due to a mosaic-virus infection, after which Ridler’s work is named, that resulted in never-before seen color patterns in the tulip fields in and around Amsterdam.

Just as tulip mania reached fever pitch, and tulip bulbs had become currency-like commodities in their own right, the market collapsed, erasing millions of guilders worth of wealth overnight.

This very much ‘analog’ bust is mirrored in the digital one that’s looming just ahead. There’s the same illusion of rationality that’ll seem insane in retrospect, when the newly destitute recognize the ethereality of the perishable asset on which they’re pinning their hopes and dreams.

Anna Ridler captures not just that, she also captures–and subjugates–the ghosts-in-the-machine that pump up the bubble and will surely make it burst.

Doesn't know much about culture, but knows when it's going to hell in a handbasket.
View all posts by editor, facilitator, decider →
This entry was posted in New Post and tagged Anna Ridler, bitcoin, Mosaic Virus, tulip mania. Bookmark the permalink.