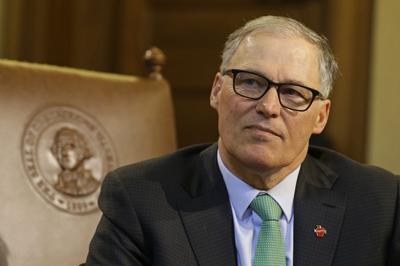 The 2020 presidential field is already crowded, and growing ever more so, so it’s probably far too early for any earnest handicapping. Even a modest “meet the candidate” effort becomes a frantic two-step, with more hopefuls announcing, forming exploratory committees, or being speculated upon and about, by the hour, by the day.

I won’t even try. But I will tip an admiring hat to the 23rd governor of the great state of Washington, Jay Robert Inslee, who formally declared his candidacy today.

I make this exception—which I insist on distinguishing from an endorsement—because Inslee makes clear in his announcement video (embedded below, or found here if my embed eludes you) that he’s coming to the race with a laser focus on a single, defining issue: climate change.

“We’re the first generation to feel the sting of climate change, and we’re the last that can do something about it.” - Jay Inslee, March 1st, 2019.

Inslee is a baby boomer—he was born in 1951—but I believe he speaks here for all our cohorts, everyone alive today, or at least those of us who accept the overwhelming evidence before us and recognize the existential threat we face.

This all positions him as an issue candidate, and he’ll probably be (erroneously) framed as a single-issue candidate. That’s a tricky proposition—it risks an illusion of irrelevancy on the stump when the kitchen-table issues, or any other issues, are debated. Inslee might own the climate-change battlefront, but the pundits will tend to turn to Sen. Sherrod Brown, for example, for the blue-collar connection; or to Sen. Elizabeth Warren to discuss economic justice.

And while that’s not necessarily good for a candidate, I’d argue it’s good, maybe even vital, for the race. Precisely because this field is so crowded, we need aspirants willing to stake their entire claim, or at least the lion’s share of it, on an issue they’re willing to designate as the defining one.

Now is indeed the time to make climate change that issue. Collectively, we’re fiddling…and Rome is most assuredly burning. Jay Inslee’s candidacy is an urgent plea to stop the music, and to get busy saving ourselves.

That may or may not win the presidency, but on the first of March, 2019 that matters not at all. What matters is getting that issue where it belongs: at the center of our debates and in the forefront of our consciousness. Jay Inslee’s announcement today seems sure to make that happen. Regardless of where his run takes him, for this alone we’re in his debt.

Doesn't know much about culture, but knows when it's going to hell in a handbasket.
View all posts by editor, facilitator, decider →
This entry was posted in Homepage and tagged climate change, Election 2020, Elizabeth Warren, Jay Inslee, Sherrod Brown. Bookmark the permalink.