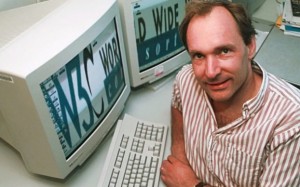 The World Wide Web is celebrating a birthday today. Actually, on this date in 1989, Tim Berners-Lee (now Sir Tim, thank you very much) outlined a somewhat vague proposal for a new electronic information-sharing protocol.

But seeing as how the web is (ideally) a cybernetic agora of thoughts and ideas, then it makes sense to celebrate its conception as its date of birth.

To say that the internet and all its convolutions and offshoots have changed everything is so self-evident, I feel silly for typing the words. We all know it, no matter how ubiquitous information-sharing has become. Those of us who came up before this thing took over remember how different life used to be, and we won’t shut up about it. Those who have grown up in this brave new world have to listen to that—a lot. It’ll be a generation, maybe two, before the internet seems as timeless and invisibly normal as television has since the ’60s or so.

So the question isn’t really how much Sir Tim’s baby changed us, it’s whether those changes are, on balance, for the best.

I’ve wrestled with this. Most days the answer seems pretty clear—I perform my day job largely online. I write, blog, hustle, and side-gig likewise online. I see something shiny, I click, and it’s Amazon-Prime’d to me in hours, not days. At times like these I bless Berners-Lee’s name, and I’d knight him again myself if I could.

Then there are those other times. My connections are glitchy, so I can’t work or side-hustle and I realize, horribly, that I have no alternative tech to get the job done. Or I’m hacked or have some data stolen—it’s happened to all of us by now, hasn’t it?—and I stomp and roar because I didn’t sign up for this and it shouldn’t be happening.

But it is. Hate proliferates online. Elections are stolen. Misinformation spreads and grows sticky, and works its way into collective consciousness.

And even worse. Ever venture downstairs to the Dark Web? Do so at peril to your sanity; it’s ugly down there. It’s supposed to be some anonymous, libertarian Eden…but it’s largely what you’d expect when libertines can be anonymous and they can (largely) dodge repercussions. They’re selling guns, drugs, and people there, and it’s all enabled by the same concepts and infrastructure that gave us Nyan Cat.

I’ve wondered, more than once, if we all wouldn’t be better off if we just shut the damn thing down (isn’t there a big red button in Sir Tim’s basement?), and we schlepped back into the analog. But that’s fantasy, right? This genie has gorged, and its big ass won’t fit back in the bottle.

So what have we got? Well, we’ve still got Tim Berners-Lee. He’s marking this anniversary by calling for a new international compact to address the worst ways in which our mutual connectivity is being abused. He’s got some good ideas, as he’s always had, and we can only hope they’ll gain some traction.

Because yes, this thing is here to stay. Best we hope for is that it goes back to being a blessing, somehow, and stops being such a burden.

Doesn't know much about culture, but knows when it's going to hell in a handbasket.
View all posts by editor, facilitator, decider →
This entry was posted in New Post and tagged Sir Tim Berners-Lee, The Internet, The World Wide Web. Bookmark the permalink.