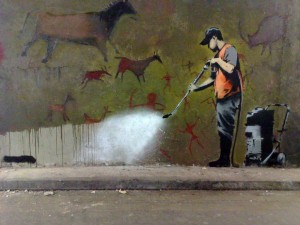 Sometimes the artist becomes a brand, a profit center. Usually when that happens the results are regrettable.

But sometimes the artist hangs on to his or her integrity. Sometimes the lure of fame and success aren’t enough to dilute the artist’s message or divert the artist’s trajectory. And that, thankfully, is where we find Banksy today.

Banksy is the pseudonym of the masked and unnamed, yet massively famous street artist and cultural phenomenon, who is spray-painting the world with a decidedly subversive, anti-consumerist message. 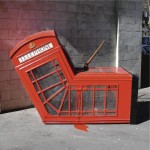 Somewhat incongruously, his works are simultaneously selling at superstar prices, even when they’re in the form of public-space murals or illegally hijacked street fixtures. A new breed of street-art collectors are happy to pay Banksy for the opportunity to navigate whatever legal challenges are necessary to transition graffito into prized property.

Here’s what we know about Banksy: He’s in his late thirties, maybe early forties, probably hails from Bristol, England, and probably latched onto his enduring 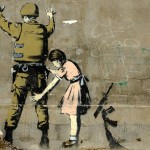 habit of obscuring his identity back when he was a lonely hunted street tagger, when the commission of his art could on any night end with his arrest or a thrashing or both.

Here’s what else we know—Banksy is in New York. He’s orchestrating (there’s really no other word for it) an October-long artistic assault on Manhattan, surprising Gotham almost daily with new murals, open-air installations, and performance pieces.

New Yorkers awoke to an example of the latter this Friday past, in the mobile form of a noisy and mightily disturbing proposition that Banksy calls The Sirens of the Lambs. It’s a slaughter-house truck, the dark symbolism of which is not quite tempered by the animated presence of too-cute plush toys. It’s not two-dimensional and it didn’t originate from a Krylon can, but it’s still pure Banksy. Check it out below.

And join me, if you will, in welcoming Banksy to our shores. He’s rich, he’s famous, and he could be standing next to you on the subway and you’d never know it. He’s also rebelliously angry and artistically persuasive. He’s trying to tell you something. Maybe it’s something absolutely vital. You’d better give him a listen, don’t you think?

Doesn't know much about culture, but knows when it's going to hell in a handbasket.
View all posts by editor, facilitator, decider →
This entry was posted in New Post and tagged Art, Banksy, culture, graffitti, New York City, street art, what is culture?. Bookmark the permalink.