Great literature might be timeless, but until now both of those superlatives—greatness and timelessness— 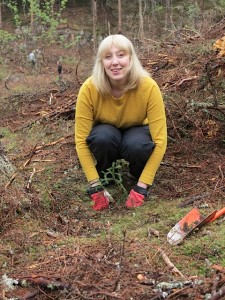 Leave it to an artist, then, to try to get ahead of that process.

Award-winning, Scottish-born conceptual artist Katie Paterson has conceived, and started executing, a century-long textual experiment called Future Library. It’s just that: a collection of manuscripts curated for posterity. Contemporary authors will contribute, but none of us will read it. Not until 2114.

Paterson and her Future Library Trust will be inviting the participation of one author per year, for the next 100 years, to contribute an unpublished manuscript that will remain unpublished until the Future Library becomes, simply, a library. Meanwhile the forest, 1000 trees, that will supply the library’s physical manifestation will be growing: Paterson planted the seedlings near Oslo, Norway this past May. 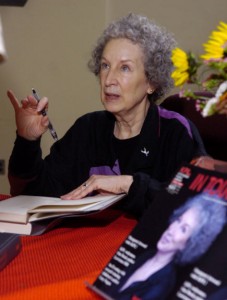 A further seed is planted, thanks to celebrated author, poet, and activist Margaret Atwood—she will be the first writer to contribute to Future Library. She’s saying very little about her Future Library manuscript (that’s kind of the point, after all), but she did say this:

“I am very honored, and also happy to be part of this endeavor. This project, at least, believes the human race will still be around in a hundred years! Future Library is bound to attract a lot of attention over the decades, as people follow the progress of the trees, note what takes up residence in and around them, and try to guess what the writers have put into their sealed boxes.”

Make no mistake—this is much more than an art project, much bigger than a literary collaboration. It’s no coincidence that Atwood, a noted and fervent environmentalist, is helping to inaugurate it. The future, after all, is often synonymous with fear—and Future Library addresses those fears head on, with nothing but optimism. Rather than asking if the twenty-second century will see the death of print, of species, of humankind itself, Future Library forges ahead, under the confident assumption that somehow, it won’t. It’s the purest definition of investment.

Pessimism, we all know, is a self-fulfilling prophecy. Maybe optimism can be the same? Katie Paterson and Margaret Atwood seem to be urging us to think so. We won’t soon find out how right they are, but—this cliche has never been more apt—time will tell.

Doesn't know much about culture, but knows when it's going to hell in a handbasket.
View all posts by editor, facilitator, decider →
This entry was posted in Homepage and tagged Art, books, Katie Paterson, literature, Margaret Atwood. Bookmark the permalink.