Did it come with a data plan? 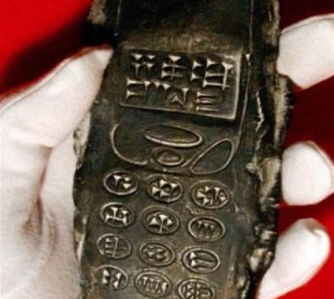 I want to believe, I really do. But the purported find of this ancient Nokia-esque cuneiform tablet has my BS-meter blaring an alert.

Its conspicuous similarity to a twenty-first (or at least, late twentieth) century comm device, albeit with an 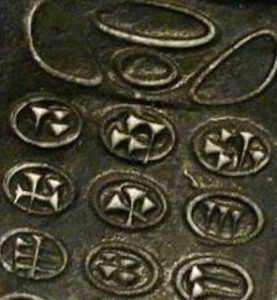 ancient Mesopotamian keypad, has the credulous internet all abuzz. Aliens? Time travel? All of the above?

No one would be happier than I if that were true. But let’s slow down and put on our tin-foil thinking caps, shall we?

First of all, there’s almost no credible reportage that I’ve seen as to the origin of this find. The myriad of stories all say that the tablet was found in an excavation near Salzburg, Austria, but there’s a glaring lack of detail as to who was performing the dig, or when, or why.

Secondly—Austria? Not your usual burying-ground for cuneiform writing, which was used in the near-east cultures of Sumer, Assyria, and Babylonia.

Not surprisingly, none of this is dismaying the believers. They’ll tell you that archaeologists regularly cover up evidence of ancient alien incursions, and that of course it would have been nothing but a thing for archaic Sumerian astronauts to pop on over to Austria (and, apparently, drop their phone).

I wouldn’t hope to disabuse such notions, but I’d also point out that 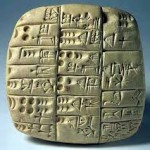 cuneiform tablets tend to look a little more like what we see here—not just unlike your dad’s cellphone, but also more like, well, lumps of clay. Also, the characters were pressed or engraved into the medium (which is exactly how and why cuneiform developed: it was a convenient script when using reed pens and wet clay). The writing on the Austrian artifact appears to be raised or embossed, precisely dissimilar to just about every other example of cuneiform we’ve yet seen.

It’d be great if it were true, and it’d open vast new lines of historical inquiry (for example, how many bars would you normally get in downtown Babylon?). I hate to be the one, but someone has to say it: this is a fraud.

Doesn't know much about culture, but knows when it's going to hell in a handbasket.
View all posts by editor, facilitator, decider →
This entry was posted in New Post and tagged bullshit, cuneiform, history, Nokia. Bookmark the permalink.

2 Responses to Did it come with a data plan?