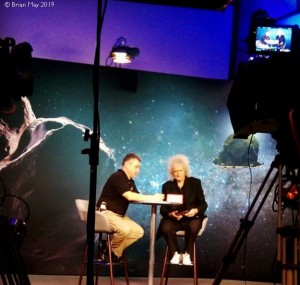 It’s surely a stellar time (so to speak) to be an alumnus of the legendary arena-rock four-piece Queen. Not that they’ve ever wavered much from their atmospheric fame, the recent (and ongoing) success of the band biopic Bohemian Rhapsody has reignited a fervor not seen since we were learning to stomp-stomp-clap way back in 1977.

As exciting as that must be for Queen guitarist Brian May, it seems that he’s found the last several days even more exciting.

That’s because he’s Doctor May to you, bub. He’s not just a six-string maestro (and make no mistake, he’s good—he uses a sixpence coin for a guitar pick, for goshsakes), he also pursues a bustling alternate life in academia, with a Ph.D in astrophysics.

Thus the last several days, as NASA’s New Horizons spacecraft has been approaching then beaming 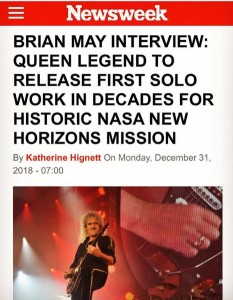 back pictures of the Kuiper Belt object Ultima Thule, Prof. May has been growing positively giddy.

Accordingly, he has once again strapped on his axe—and picked up his sixpence—to bestow upon us all his first solo release in years: a tribute to this record-shattering mission and to our first glimpse of a strange and stunningly distant world. Enjoy. 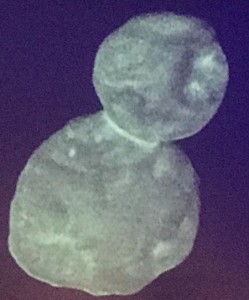 Doesn't know much about culture, but knows when it's going to hell in a handbasket.
View all posts by editor, facilitator, decider →
This entry was posted in New Post and tagged Bohemian Rhapsody, Brian May, NASA, New Horizons, Queen, Ultima Thule. Bookmark the permalink.