Deconstructing the art and spectacle of Ivanka Vacuuming 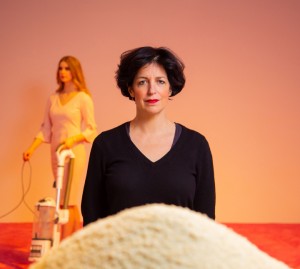 Performance art can be a challenge to interpret. By its very nature it represents a forfeiture of control—by relocating the creative process from the studio to the stage, and by producing and reproducing iterative art before a mutable audience, the artist-performer engages in a constant collaboration that can’t help but result in an ever-shifting message. Observers are left to wonder how much of that is part of the artist’s original intention, how much is serendipity, and how much is unintended static and unwanted noise.

That ambiguity is on display (and was apparently written into the script) with Jennifer Rubell‘s conceptual performance piece, Ivanka Vacuuming, presented by Washington’s CulturalDC at the Flashpoint Gallery through February 17th.

The performance consists of a smartly dressed woman, said to be an Ivanka Trump lookalike (debatable), vacuuming a pink rug in a sparse, pink-shaded back lit room. A 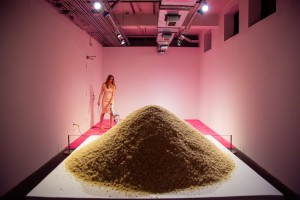 table is prepared for the audience, set with a mountain of homogeneous white crumbs, which they’re invited to sprinkle on the carpet, thus queuing up yet more hoovering chores for “Ivanka.”

CulturalDC calls the piece “boundary-pushing,” which is apt enough, without directly addressing the messaging or subtext. Ivanka Trump herself did so obliquely, responding to news of the performance by tweeting, “Women can choose to knock each other down or build each other up. I choose the latter.” Other members of the first family also took exception by tweet, with varying levels of indignation.

The umbrage might be appropriate, if the artist’s intention was to demean. Interestingly, that’s not at all clear. Rubell seems to lovingly embrace the confusion, calling the work both “complicated,” and “icky.” Her public comments on the piece make no effort to clarify what, exactly, she’s trying to convey with Ivanka Vacuuming. “It’s funny, it’s pleasurable, it makes us feel powerful, and we want to do it more,” she said. “We like having the power to elicit a specific and certain response. Also, we know she’ll keep vacuuming whether we (throw crumbs) or not, so it’s not really our fault, right?”

The fact that the creator asks the question is indicative of the layers of meaning we might infer here—and whether or not she can answer her own query almost becomes irrelevant. At the most pedestrian level it’s pure schadenfreude: we who have cleaned countless floors can symbolically engage with an icon who has likely never cleaned anything—and not just that, we can even make it worse for her.

Or maybe we, the audience are the damnable elites here? With all that pink—could Rubell have been positioning ersatz-Ivanka as the anonymous, ubiquitous feminine? She could have chosen any manner in which her subject could have been puppeteered—why vacuuming? It’s an epitome of domestic drudgery, and has a 1950s aura of benign repression. Every male audience member who tosses down crumbs just might be hearkening back to that. And every female who does so might ponder the other ways in which she girds the patriarchy.

We’re left with a number of questions, all centering around this one: Is Ivanka uber-woman, or every woman? And we’re given no answers…possibly because it’s not for us to know.

Doesn't know much about culture, but knows when it's going to hell in a handbasket.
View all posts by editor, facilitator, decider →
This entry was posted in New Post and tagged CulturalDC, Flashpoint Gallery, Ivank Trump, Jennifer Rubell, performance art, What is art?. Bookmark the permalink.