The pendulum’s gonna do what a pendulum does 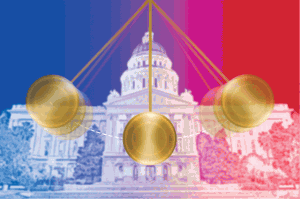 Someone once told me that if I really wanted to know what was going on in the world I should skip the front page, and flip directly to the business page. Years have passed, and I’ve since dabbled in business directly, so I know corporate America isn’t exactly devoid of lies…but the point remains valid. Business people, business leaders in particular, are incentivized to deal in facts, in reality. They’re as prone as any of us to bias and political dogma, but at the end of the day they have the means to know which way the cultural winds are blowing, and they have the motive (profit variety) to drift in that same direction.

So draw a line from that to the statement issued this week by the Business Roundtable, a pro-business lobbying group founded in 1972 by the CEO of Alcoa. Current membership includes CEOs of Walmart, JPMorgan Chase, Apple, Amazon, and a couple hundred other leading American businesses. All of those CEOs signed the joint communique which redefines the obligations of corporations and their leadership. They stated that they must serve communities, their employees, our culture, and our nation.

This is huge. For decades the Roundtable and every group like it recognized just one master: the shareholder; and just one responsibility: to increase shareholder value. This then is a tectonic shift.

So why might corporate America believe that a liberal outlook will serve them better than a Trumpian one? It could be as simple as looking at the economic forecast—Trump continues to bellow that we’re doing great (blazing two percent growth!), while every rational economic indicator says a recession is on the horizon. It’s up in the air yet whether it’ll hit before the elections, but the smart money says that if it does, Trump can’t win.

Otherwise, there’s the simple, unavoidable fact of Trump fatigue. Some are doubting it exists, but that’s only because the MAGAs-for-life are so vocal it’s easy to forget they’re such a tiny minority. The middle is teeming, and they’re getting awful tired of this unremitting unreality show.

But mostly it’s just because we’re a nation hooked on extremes, and we like to swing back and forth between them. The cycles tend to run, not coincidentally, in four or eight year spans. Looking back on history you might notice that the shorter swings tend to happen when the movement is particularly ugly, boorish, and extremist. They wear out their welcome quicker, as it were, the public tires of them and sends them packing, and the pendulum swings back and we give the other side a try for a while.

None of this guarantees a Trump loss in 2020, of course. (Never underestimate the Dem penchant for choking in the clutch.) It only means that he’s going to fight some formidable headwinds to pull out a win.

And it’s not just me saying that, it’s the Business Roundtable. You know, Trump’s people.

Doesn't know much about culture, but knows when it's going to hell in a handbasket.
View all posts by editor, facilitator, decider →
This entry was posted in New Post and tagged Business Roundtable, Election 2020, politics, Trump. Bookmark the permalink.