This week in conspicuous art theft 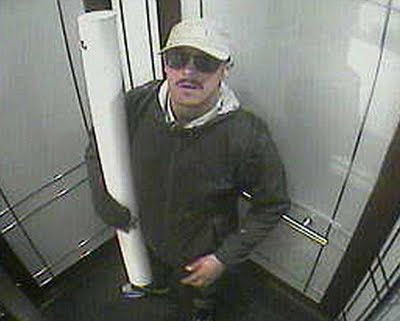 Isn’t it great when the thief looks directly at the camera?

At about 6pm, on Thursday, August 11, the master criminal depicted above strolled into the Marc 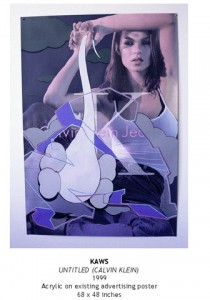 Ecko Gallery on West 23rd Street in Manhattan, and strolled out with $100,000 worth of purloined art. His haul was an acrylic-on-advertising poster, created in 1999 by the Brooklyn artist KAWS (neé Brian Donnelly).

In its reporting on Friday, The Village Voice dubs the thief a “hipster-type person,” to which The Deconstruction must protest. It’s the mustache, isn’t it V.V.? So unfair. A mustache does not automatically a hipster make. The Deconstruction, for one, was favoring really obscure mustaches (you’ve probably never heard of them) long before hipsters, and this art thief, came along.

In any case, as fun and interesting as art theft can be, it becomes a lot less interesting when/if it’s revealed to be a P.R. stunt. We’re not jumping to conclusions (well okay, maybe we are), but in 2006 the selfsame Marc Ecko rented then re-painted a Boeing 747, all in the pursuit of internet famedom, as the guy who tagged Air Force One. 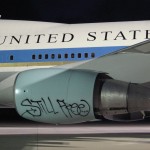 Oh, but the NYPD is investigating Thursday’s theft. So if it turns out you stole from your own gallery, maybe you’ll finally get to wear those shiny bracelets you like to pretend you deserve.

Doesn't know much about culture, but knows when it's going to hell in a handbasket.
View all posts by editor, facilitator, decider →
This entry was posted in New Post and tagged art theft, kaws, marc ecko. Bookmark the permalink.

7 Responses to This week in conspicuous art theft