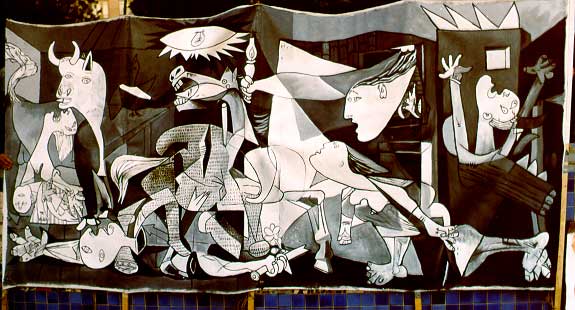 Is great art static? Does it capture a moment in time, then remain unchanged for posterity? Or is it permissible to reinterpret historical masterpieces with modern technology for the sake of new appreciation?

These aren’t hypothetical questions. Artist Lena Gieseke has completed a 3D exploration of Pablo Picasso’s Guernica - arguably the most politically charged artwork of the twentieth century.

On April 26, 1937 the Condor Legion of the German Luftwaffe, in coordination with the Italian Aviazione Legionaria, bombed civilian targets throughout the Basque town of Guernica in northern Spain. The action, taken in support of Francisco Franco’s Nationalist faction during the Spanish Civil War, resulted in approximately 1,000 civilian deaths, and is considered to be the first instance of airborne terror bombing in history. It was to foreshadow the systematic carpet-bombing of Europe that would commence in just a few years.

In response, and within just 3 months, Picasso completed Guernica, a 349 x 776 cm oil-on-canvas that was displayed that year at the Paris World’s Fair. It now resides at the Museo Reina Sofia in Madrid.

In the context of the history of both art and conflict, Guernica is a treasure. As a study in Synthetic Cubism, a movement that Picasso pioneered, this painting is unmatched. It depicts horror, pain, chaos and confusion with a clarity not normally found in the surrealistic art world of the early twentieth century. Picasso himself said that when he first learned of the bombing of Guernica, he found it impossible to put into words his tempest of emotions. He let his painting speak for him.

On a more practical level, Guernica fixed the world’s attention on Spain. Although Franco’s Nationalists were to win the war, and Franco would rule Spain as dictator until 1975, the widespread revulsion at the bombing of Guernica inspired a generation of idealists (including the all-American Abraham Lincoln Brigade) to take up arms against fascism. Guernica was an anti-war statement that, paradoxically, provoked even more conflict.

So we return to the question with which we began. Must Guernica remain canonical, untouched? Or can a 3D reinterpretation reveal therein more terror, more turmoil, than we have thus far seen?

Doesn't know much about culture, but knows when it's going to hell in a handbasket.
View all posts by editor, facilitator, decider →
This entry was posted in New Post, Uncategorized and tagged Guernica, history, Lena Gieseke, Michele Smarty, Picasso, Words I Seek. Bookmark the permalink.