In the bullseye here in the Buckeye State 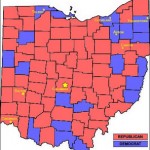 The phone won’t stop ringing. Earlier in the cycle the calls were all from familiar voices, the candidates themselves or their smooth-talking celebrity surrogates. Here in the final push days, the types of calls are changing, getting more aggressive. They’re push-polling (“Wouldn’t you agree that That Other Guy is a flesh-clad demon, out to destroy us all?”), and trying to shame me into voting right now. Always all but suggesting that eschewing my hard-fought early-voting rights, that actually voting on election day, is somehow like not voting at all. Like letting the terrorists win.

If you know anyone from Ohio, or if you yourself suffer from this affliction, then you know that all the above is what every Ohioan is kvetching about these days. We’re firmly in the crosshairs of two billion-dollar political machines, with every talking head and would-be political know-it-all declaring that we’re set to decide this presidential election.

But kvetch though we do, we’ve got a little undercurrent going on here that no one’s talking about. Most of us probably aren’t even aware of it, and quite a few will deny it to my face. But I insist it’s true: we’re enjoying this, and we’re gonna miss it when it’s over. 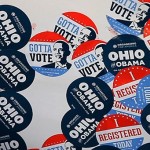 And why not? Our votes are more valuable than anyone else’s. Isn’t that what they’re telling us? Sure they’re drowning us in media, and that really does suck, but they’re also kissing every bit of our corn-fed Buckeye asses. And when I say “they” I’m talking about some of the most powerful men who walk the earth.

So, yeah, Iowa. My vote is worth like 2 or 3 of yours. North Carolina and Virginia, ditto. And non-swing states, the ones that’ll never shift away of their blue or red 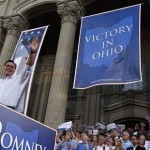 hues, their votes are practically worthless next to mine. California, Texas, I’m looking at you. The candidates adore me, and they’ve no incentive at all to even acknowledge you.

See what I mean? Deciding an election goes to your head.

But it’s almost over. In a few days, me and a few other sociopathic last-minute electioneers will go cast our million-dollar votes, and be done with it. The votes will be counted, Obama and Romney will sue the shit out of each other, the Supreme Court will do something that will make half of us want to throw up…and then it’ll be over.

And Ohio goes back to being Ohio.

Thinking on that fate, brother Buckeye, aren’t you now willing to admit you’re going to miss this suckfest once it’s gone?

Doesn't know much about culture, but knows when it's going to hell in a handbasket.
View all posts by editor, facilitator, decider →
This entry was posted in New Post and tagged election 2012, Ohio, political culture, what is culture?. Bookmark the permalink.

One Response to In the bullseye here in the Buckeye State