Shakespeare always walked a fine line with his treatment of monarchy. On the one hand, he knew that the lives of royals were deep and rich wells of entertainment; power, wealth, sex, and betrayal were as popular devices in fiction then as now, and these things all but defined the lives of the ruling class. But on the other hand, his career and his survival depended on pleasing the contemporary monarchy. From 1583 he wrote and performed plays exclusively under the patronage of the queen. Royal censors reviewed every manuscript and probably watched every performance. Ill-considered words and insulting portrayals of Elizabeth’s predecessors, lineal or otherwise, could rob him of his position and even his life.

It’s somewhat a surprise, then, that one of his earliest histories, Richard III, strayed so far from hagiography. Richard was one of the few truly unredeemable villains in Shakespeare’s pantheon: scheming, murdering, utterly devoid of sympathy. Ugly too. In his opening monologue, the one performed in the video above, and one that’s among the most famous from Shakespeare’s work (“Now is the winter of our discontent…”), Richard speaks in parallel of his villainy and his physical deformity. The audience comes to link the two, inseparably.

Richard was traditionally portrayed as a limping hunchback, although there’s little historical evidence of this. It’s 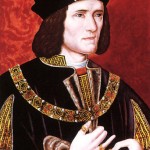 certain that he trained as a knight and was active in combat, so he couldn’t have been too physically frail. And it’s almost certain he was a villain, although it’s arguable whether he was all that worse than most of his peers. All evidence points to his culpability in the murder of his nephews, the famous Princes in the Tower. But he was hardly the first monarch, nor would he be the last, to secure his throne through murder. And it was more of Shakespeare’s spurious anti-hagiography to depict the princes, who in reality were ages 9 and 12 at the time of their imprisonment, constantly outwitting Richard and belittling him to his face.

This fascinating intersection of fiction and history, of reality and reputation, becomes all the more compelling as archaeologists from the University of Leicester proceed with a plan to exhume Richard III from his presumed resting place, near to where he is said to have fallen in the Battle of Bosworth in 1485. Richard, the last English king to die in battle, was buried beneath a council parking lot in Leicester, in the East Midlands, UK.

The remains exhumed there show clear battle injuries, with a fractured skull and a barbed arrowhead embedded in the spine. It also shows signs of scoliosis, or curvature of the spine. It’s known that the modern-day carpark was the site of a long-ago razed Franciscan friary—precisely where history says Richard was interred. Forensic artists are already working on reconstructing his face, for comparison with portraiture, and DNA from the skeleton will soon be matched with that of a London man thought to be a descendant of Richard’s sister. We might know in the earliest weeks of 2013 whether Richard III has definitely been uncovered.

And what might come of that? I’ve argued here in the past against the destructive curiosity of disinterment, of the grave-robbing approach to history. I’m not religious in the least, but I do feel strongly that the dead should be left to rest, in all but the most extreme circumstances. Does this qualify? Maybe not, but something tells me Richard yearns to be uncovered. I don’t expect any CSI drama that will prove or disprove any part of his legend, except perhaps that demonstration of folklore’s exaggeration (in how a bit of scoliosis can transform into crippled, somehow demonic grotesquery). But maybe in dragging Richard back into the light, we’ll give him a chance to show us he was a man, and not quite the shuffling Machiavellian creature that Shakespeare would give us.

A coda: Lest I come down too hard on Willy Shakes
and his version of Richard, I’ll add this: I love that
play. Not only does the author show deft adroitness
in making the audience Richard’s co-conspirator
(that aforementioned monologue consists of Richard
explaining how and why he’ll seize the throne. He
offers no apology yet somehow gets the audience
nodding along with him)…he also gives his actors a
lot of room to flex their villainous muscles. His plays
are famously light on stage direction, and almost
entirely devoid of character description.Dialogue
alone reveals all. As he speaks of his pursuit of Lady
Anne (this after killing most of her family), he says,
“I’ll have her, but I will not keep her long.”
Sinister, maybe, but somewhat flat when read
without inflection. Now check out, soon as
you can, how Al Pacino delivers that line in his
plainly awesome 1996 move, Looking for Richard.
The way he cackles as he vows not to keep her
will send chills down your spine.

Doesn't know much about culture, but knows when it's going to hell in a handbasket.
View all posts by editor, facilitator, decider →
This entry was posted in Uncategorized and tagged Al Pacino, Art, culture, literature, Looking for Richard, Richard III, Shakespeare, University of Leicester, what is culture?. Bookmark the permalink.