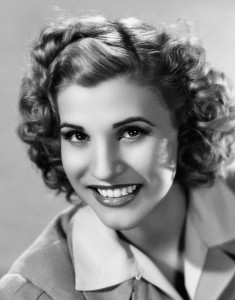 It’s fitting, now that we’re debating the roles of women in warfare, that we bid farewell to the last surviving member of the Andrews Sisters.

But from the world of entertainment, few gave more than the Andrews Sisters. Only Bob Hope performed for more U.S. troops, and logged more USO miles. The Andrews Sisters traveled to frontlines and combat theaters all over the world, sold war bonds, and 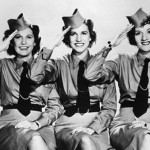 helped create the famous Hollywood Canteen. They were on stage on August 14, 1945 when they were handed a note, and Patty tearfully announced to the soldiers and sailors in attendance that the war was finally over.

It’s no coincidence that the Andrews Sisters, Patty, Maxene, and LaVerne, are most fondly remembered for their wartime contributions. They continued to perform after the war, sometimes appearing in movies, sometimes trying their hands at solo careers. But like so many who answered the call (the bugle call, you might say), they found that their service during the war most defined their lives. Everything that came after might not have been an anticlimax, but was certainly less eventful.

The Andrews Sisters effectively ceased as a performing group in 1967, with LaVerne’s death. Maxene died in October, 1995. Patty died at home in Northridge, California on Wednesday, at the age of 94. She and her sisters, brilliant entertainers and selfless patriots, will never be forgotten.

Doesn't know much about culture, but knows when it's going to hell in a handbasket.
View all posts by editor, facilitator, decider →
This entry was posted in New Post and tagged Andrews Sisters, Bob Hope, culture, Hollywood Canteen, LaVerne Andrews. Maxene Andrews, Patty Andrews, RIP, what is culture?, World War II. Bookmark the permalink.