Petro Wodkins strikes again (at a much more deserving target) 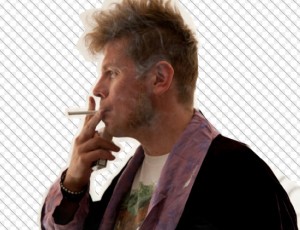 Artist/provocateur Petro Wodkins has made some more enemies—by making art, and by making a statement.

The Deconstruction reported on his hijinks in Brussels last May, when he artistically hijacked that city’s beloved Julianski; the somewhat NSFW 17th century statue Manneken Pis. It was kind of funny, but perhaps a little frivolous, with the point of it all being a little elusive.

His latest aesthetic offensive, though, is a lot more satisfying, because the target is so much more richly deserving.

Robert Mugabe is another of those genocidal, self-enriching, land-raping dictators that seem to delight in impoverishing their own people for their own benefit. He’s been doing it for decades, and has as a result turned 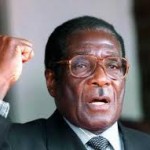 the formerly prosperous and beautiful nation of Zimbabwe into a third-world hellhole. The man has a Hitler mustache, for pete’s sake.

There’s only a little substantiation of this, outside Wodkin’s version of events, but here goes: Late last year, Wodkins was apparently (and hilariously) invited by Mugabe’s government to participate in the Harare International Festival of the Arts. Probably snickering with delight, he agreed. Someone in Harare’s Ministry of Public Works finally did a little due diligence, and Wodkins’s invitation was rescinded in 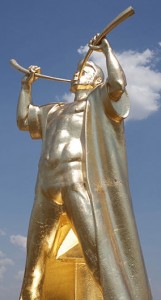 October…but not before he constructed a gaudy gold statue of himself (because why not?), and recorded a far-from-complimentary song about Mugabe and his iron-fisted rule. Then last week, he packed up his bag of tricks and went to Zimbabwe.

Using hidden cameras (media is tightly controlled in Mugabe’s little fiefdom), Wodkins recorded the public display of his statue, and the debut of his anti-Mugabe song. According to Wodkins, at least, this resulted in joyous dancing in the streets, followed by a response by Mugabe’s army. Wodkins says the statue was pulled down, and he (Wodkins) was chased by armed thugs, finally escaping unharmed to Zambia.

Who knows. Some stories are too good to be true, and some stories are so good they should be true. I hope this really happened, I hope Mugabe knows about it, and I hope he raged impotently like Charlie-Chaplin-as-Adolf-Hitler.

Because here’s the truth about Robert Mugabe: he’s 90 years old, his grip on power is as secure as ever, and despite the best wishes and efforts of the civilized world, he’s unlikely to ever be punished for his crimes. There’s not much justice queued up for scum like him, at least not in this world, but there is—maybe—the justice of proactive aesthetics. And it might just come down to an avenging artist like Petro Wodkins to show him what free people really think of him.

Doesn't know much about culture, but knows when it's going to hell in a handbasket.
View all posts by editor, facilitator, decider →
This entry was posted in New Post and tagged Harare International Festival of the Arts, Petro Wodkins, Robert Mugabe, Zimbabwe. Bookmark the permalink.