We’re not supposed to try to valuate the intangibles of culture. Except, you know, we’re a people who valuate everything.

So let’s do this. According to new research just released by the National Endowment for the Arts and the Bureau of Economic Analysis (nonpartisan and apolitical entities both), the arts and culture segment 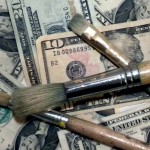 contributes nearly three quarters of a trillion dollars—$763.6 billion, to be exact—to the U.S. GDP. Every damn year.

That’s almost 5% of our economy. It’s just short of the impact from the food and agriculture industries. It’s more than the entire GDP of Switzerland.

So there’s your proof. Your patronage of the arts, in whatever form and measure that suits you best, is a valuable economic engine for the common good. Buy art!

Doesn't know much about culture, but knows when it's going to hell in a handbasket.
View all posts by editor, facilitator, decider →
This entry was posted in New Post and tagged Art, buy art, What is art?. Bookmark the permalink.