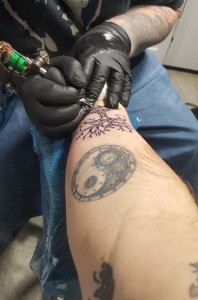 My euphemisms vary: sometimes I say I prefer having my art collection with me at all times. Sometimes (when I’m feeling a little more honest) I allow as how I’m wearing my mid-life crisis on my skin.

Either way, once or twice a year I feel inclined to sit still for a couple hours and receive the inky needles…as similarly inclined folk have been doing for ten or twenty thousand years.

Motivations for doing so also vary, well nigh to the gamut stratum. Anthropologists might tell you that traditional tattooing is a rite of passage, and a mark of tribal inclusion. I’m sure they’re right on some level, but human impulse mirrors the human dermis: multi-layered, and more opaque the deeper you go.

So those traditional tattooees surely had a multitude of reasons, like me, for their voluntary body modification. I consider myself well past the sell-by date for rites of passage; and as for my tribe, good people that they are, they’re plenty inclusive without heed of outward appearances.

I’d struggle, then, to tell you exactly why I choose to be tattooed. I’ve on occasion done it to mark some special milestone, but then again I’ve gone through plenty of milestones without ink…and I’ve been inked plenty of times with no milestones associated at all.

Yesterday I met up with the merry artisans at Arkham Tattoo, and was pleased and honored to receive the ministrations of the proprietor, Eric Starr. Eric’s artistic chops are legendary (don’t take my word for it, go see for yourself), but perhaps more importantly from where I was sitting (speaking quite literally here), Eric’s an epic conversationalist.

So over the hour or so it took to implant this most recent masterpiece, Eric and I had a wide-ranging 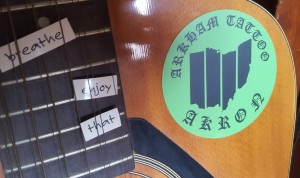 discussion—much of it tattoo-centric, since as I duly warned him, I was of a mind to write about it. Eric kindly schooled me on the history of tattooing technology (turns out the first patented electric tattoo machine was more or less stolen from Thomas Edison—which if you know your Edison history is some sweet karmic justice).

We talked about the pain of the process. I was surprised to learn it’s rarely an issue, even with first timers. “People know what to expect,” Eric told me. In fact, he said, it usually goes in the other direction: it hurts less than people anticipate. “If it was that heinous we wouldn’t have kept it up for the last five thousand years.”

I asked him what he’d like first timers to know before they come in the shop, and his answer was downright fascinating. “They should know what they want,” he said. I thought I understood what he meant, but it soon became clear that this, too, was deep and stratified.

He explained that a lot of the difficulty has started with the 21st-century effusion of tattoo-shop reality shows. “A true reality show about a tattoo shop would be the most boring thing on TV,” he declared. The broadcast versions are spiced up, it seems, by pairing a story with every tattoo. And it’s all well and good that an ink piece should have personal meaning—that’s ideal, in fact. But it’s incumbent upon the customer, not the artist, to choose what sort of image best marks the fifth anniversary of Papaw’s passing, or whatever.

The upshot has been a cohort of seekers weaned on these shows, with their expectations crafted accordingly. If one of them is a cancer survivor, bless ‘em, they come into the shop expecting to be shown a selection of ‘cancer-survivor tattoos.’

That just ain’t how it works, people.

Whatever your motivation, whatever brought you to that chair, you’re the one who’ll be wearing the art for life. Come with an image in mind, bring a sample or a vivid description, or go ahead and choose a bit of flash off the wall. But in any case, understand that you’ll be owning it, solely and ever and always. The choice is entirely yours. As Eric writes in an insightful essay on this very subject, “I am not a Priest, Reverend, Deacon, Monk, Shaman, Healer, Counselor, Psychiatrist, Psychologist…or a Hairdresser or Bartender.” Pros like Eric want to work with you collaboratively to create something you’ll be overjoyed with, but they can’t carry the load alone.

Just as importantly, though, remember that it is a collaboration. Your tattooer is graced with not just talent, but also experience. They understand how your flat printed image will translate onto the contours of your body, and they know how it’s likely to change over the long years ahead of you. Avail yourself of that experience, and if your artist tells you that what you have in mind is inadvisable, by all means listen. Every tattoo I get starts with pretty much precisely these words: “Here’s what I’m thinking, tell me if this’ll work…”.

Having thought it over, I still can’t tell you exactly what brought me to Eric’s chair yesterday. Maybe I was just ready for another one, but that doesn’t at all diminish the depth of meaning to it. He and I created something, it’s here on me right now, and here it’ll remain even after the last light that is me blinks out. If that’s not meaning, I don’t know what is. The only other thing I’m sure of is that some day, possibly one relatively soon, I’ll get that undefinable itch yet again. And Eric will hear me say, “Tell me if this’ll work…”.

Doesn't know much about culture, but knows when it's going to hell in a handbasket.
View all posts by editor, facilitator, decider →
This entry was posted in Homepage and tagged Arkham Tattoo, Eric Starr, tattoo, tattooing. Bookmark the permalink.