Putin on the Potomac (a painting, a prank) 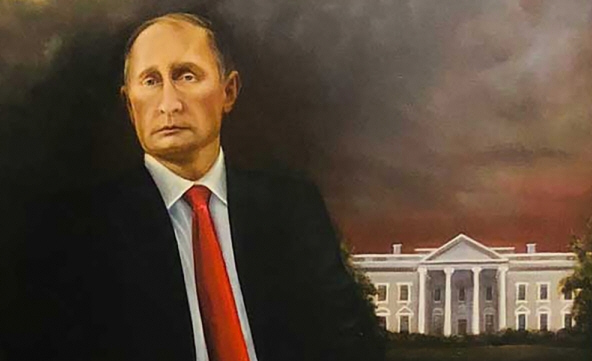 New York City artist Brian Whiteley is laying claim to an epic prank executed last month at Donald Trump’s very own D.C. profit center, the Trump International Hotel. The hotel, located near the White House on Pennsylvania Avenue, on the site of the Old Post Office (the site is still owned by the federal government), opened just 13 days before the 2016 election, and is the epicenter of a host of Trump-related controversies and alleged conflicts of interest.

Whiteley, who has something of a history of targeting Trump through art, says he checked into suite 435 of the hotel on the first of August, and hung his painting of Russian president 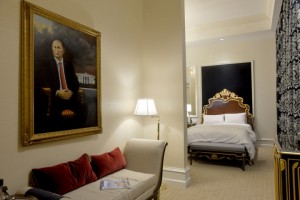 Vladimir Putin on the wall. The painting shows Putin in a state of menacing repose, with the White House behind him and to his left. Whiteley says the painting, and its temporary residence at the Trump International, is a “commentary on the cult of authoritarianism” that he says the Trump regime engenders.

Per Whiteley’s account, he and an unnamed accomplice stayed one night in the suite, and after hanging the painting they went out for dinner and drinks. They met a party of Trump supporters, out on the town celebrating a birthday, and invited them back to the hotel. Whiteley and his partner say they didn’t call attention to the Putin picture, but they saw that several of their guests noticed it. One of them said, “Putin, fuck yeah.”

Whiteley says he left the painting in place after checking out, and returned a month later to find it still on display. He believes numerous hotel patrons must have stayed in the room during that interim, but none seem to have questioned its existence. Around the beginning of September he convinced lobby staff to allow him to return to the room, then unoccupied, telling them that he’d left something there during a previous stay. A doorman accompanied him, and summoned hotel security when he saw Whiteley removing the painting from the wall. Whiteley was able to prove the painting was his and that it was covering hotel-owned art (which Whiteley left undisturbed), but he says he was questioned at length and was unceremoniously ejected from the hotel.

Officials from the Trump International deny that any of this ever happened.

Read the full story at Hyperallegic.

Doesn't know much about culture, but knows when it's going to hell in a handbasket.
View all posts by editor, facilitator, decider →
This entry was posted in New Post and tagged Art, Brian Whiteley, pranks, Trump, Trump International Hotel. Bookmark the permalink.