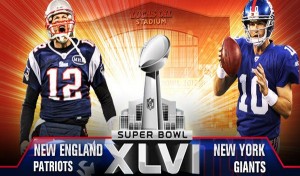 Schizophrenia Bowl? It very well might be. After all, the QB from that Jersey team seems to be perpetually stuck in the shadows of his father and brother; one solution might be to bring home another Superbowl ring. So in that pursuit, where does he find himself today? Inside his brother’s home stadium. That’s sibling rivalry writ large.

The opposing QB doesn’t have such problems. He’s just faced with the daily horror of seeing what a supermodel looks like first thing in the morning.

We could continue to ridicule (in fact, we will)…but the fact remains that today’s match-up is a near-exact clone of 2008′s Superbowl XLII. That’s evidence of further schizophrenia but we can forgive that. Because the 2008 game, which the Giants took by 3, was one of the best Superbowls football games sporting events THINGS we have ever seen. And we want more.

Kickoff’s off in five hours, give or take. Let the excitement build to fever pitch. Then return here for the rootenist tootenist football liveblogging you’ll see this lifetime. No need to watch the game, the Deconstruction will have you covered, play by play.

Until then. For now, let the pregaming commence.

6:25: “Coin toss ceremony”. Really? I love this game but damn does it take itself a little too seriously.

6:29: If Hyundai is any indication, then we can expect some damned silly commercials. Don’t mind at all that I was up getting a cold brewskie then.

6:34: Eli is throwing just fine, thanks. So why all the running?

6:39: Oh lordy, a vampire-specific car commercial. How did we not see this coming?

6:46: Ahmad Bradshaw just ran about an eighth of a mile a hair’s breadth away from being out of bounds.

6:50: The Pats lose a chance at a turnover by having too many men on the field. Wtf?

6:51: Touchdown! The Giants are dominating this game.

6:55: And I drink a shot every time I see those stupid polar bears.

7:01: Brady just threw for a first down. His best play so far equates to Manning’s most average.

7:02: One quarter down. Al Michaels just said that the Patriots look “unsettled.” Not a resounding vote of confidence for the Boston boys.

7:19: Giants just dinged 5 yards for illegal huddle. This seems to be the game of obscure penalties.

7: 22: We interrupt this football to see a half-naked David Beckham. Why??

7:25: Brady back in the hotseat. This poor bastard just can’t complete a pass.

7:26: Okay, he completed that one. An inch or two short of first down.

7:28: Back to the Giant’s ground game. Bradshaw just found a nice big hole to run through.

7:31: Tough holding penalty. Giant’s lost their first down and are about to punt.

7:37: Coming up on the two-minute warning; Patriots starting to hit their stride.

7:43: A bit of a drive; Pats are moving down the field. Less than a minute left in the half.

7:52: And that’s one half all done. This has been some fine football thus far. And now…Madonna. No offense to the Material Senior Citizen but I’ve got an unbroken record of not watching half-time shows. Is Downton Abbey on yet? Back in 30 minutes….

8:06: Checking in on the peanut gallery, I see that the Count of Monte Fisto just accused me of lusting after David Beckham. Wouldn’t that make me a Spice Girl?

8:22: Back at it. So far the star of this game, in my house at least, is Sam Adams Coastal Wheat. Good stuff.

8:24: As Chad Ochocinco catches a big pass, my wife opines: “People shouldn’t be allowed to change their names for stupid reasons.”

8:28: New England scores again. Should I scroll up and delete that bit about the Giants dominating this game?

8:40: “Aerial coverage by Budweiser.” As someone who grew up in the shadow of the Goodyear blimp I call BS on that. One more reason to drink craft beer.

8:47: The delight I feel watching Tom Brady getting sacked kind of interferes with my journalistic neutrality.

8:54: Giants back in scoring position. NOT a dull game!

8:59: Start of the fourth quarter. This game is flying by.

9:03: Wow, what a play – Brady dodges two near-sacks, then throws an interception. Should have just let himself get smacked.

9:04: The first turnover of the game puts Manning back on offense. Let’s see what he does with that.

9:06: Not wanting to dwell on the commercials, but finally we see Matthew Broderick recreate (sort of) his greatest role. Funny, but it would have been funnier if they hadn’t spent the last 2 weeks hyping it. Simmer down, advertisers. Your commercials really aren’t the main event here.

9:08: Back to the football, thankfully. Manning seems a little shaken but he got lucky with a defensive offsides.

9:13: The Giants are moving downfield with a series of very nice passes. Another drive? Let’s not get ahead of ourselves….

9:17: Aaand then the Giants start hobbling themselves with stupid penalties and bad time management. The drive stumbles.

9:23: New England is back on offense and not looking bad – even though New York’s defense is particularly on their game now. Nice pass by Brady for some serious gain of real estate.

9:27: So what I meant to say was, the Patriots are dominating this game. Very much so.

9:29: Five minutes left in the game, and a first down for New England. If they score again this game is over.

9:31: Well, no score for Brady so Manning’s still in it. Let’s see what he can do with the opportunity.

9:33: Holy smokes, what was that? A forty yard pass? That could turn things around.

9:37: And another good throw puts the Giants back in scoring range. Don’t count these fellers out yet.

9:45: The talking-head consensus seems to be that the touchdown is bad news for New York, because it means that Tom Brady has nearly a minute to move back downfield and score. We’ll see….

9:48: Brady sacked at the 13-yard line on a third down. Giselle is gonna leave him for that.

9:50: But then he throws for a first down. I was just about to predict his defeat, too.

9:55: Eli Manning as MVP? Probably. That was a damned good game. Fine liveblogging too, if I do say so. Thanks for tuning in, and goodnight.

Doesn't know much about culture, but knows when it's going to hell in a handbasket.
View all posts by editor, facilitator, decider →
This entry was posted in New Post and tagged superbowl, superbowl XLVI. Bookmark the permalink.