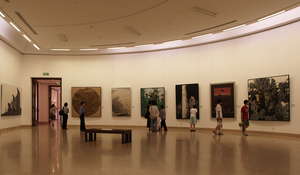 Should art museums throughout the world be free to lend their collections, thus spreading culture and goodwill? And should victims of art theft, particularly those victimized through wartime plunder, be free to pursue the return of their property?

For most of us, the answer to both of these questions is yes. Therein lies the problem.

The United States, more than any other country, has a history of allowing the seizure of art while on loan from abroad. Holocaust victims in particular have had considerable success in reclaiming their stolen treasures this way.

As a result, foreign museums have been less and less inclined to loan works to America–and not just in cases of disputed provenance. Russia has been the first to cease all art loans to American museums, with several other countries threatening to follow suit.

In response, Senators Diane Feinstein and Orrin Hatch have introduced legislation that would indemnify loaned artwork against most attempts at seizure.

The Foreign Cultural Exchange Jurisdictional Immunity Clarification Act (Senate Bill 2212) is designed to augment earlier laws (including the Foreign Sovereign Immunities Act and the Immunity from Seizure Act) by narrowly defining the types of cases that can result in seizure. In so doing, the bill’s authors hope to alleviate most of the concerns of foreign museums and thus encourage a more robust system of cultural exchange.

Critics on one side say the definition is far too narrow. The bill will allow seizure only in cases where wartime plunder can be proven beyond reasonable doubt. This would eliminate the claims of an entire class of victims: those who “sold” their artwork to Nazis, but only under threat of death and at a fraction of fair market value.

Meanwhile, foreign museum directors seem unimpressed. They’ve signaled an unwillingness to resume normal exchanges with the U.S. unless all artwork is protected from seizure. It looks as though compromise legislation that was designed to placate everyone is pleasing no one.

It’s a conundrum. On one hand, a functioning system of worldwide cultural exchange is necessary and vital. On the other, plunder and theft should always be redressed, no matter how many years have passed and how many feathers are ruffled.

I can see no easy solution. The only thing that’s clear is that S.B. 2212, however well intentioned, changes nothing.

Doesn't know much about culture, but knows when it's going to hell in a handbasket.
View all posts by editor, facilitator, decider →
This entry was posted in New Post and tagged art theft, cultural exchange. Bookmark the permalink.

One Response to A fine art conundrum