The hands of the artist, across time 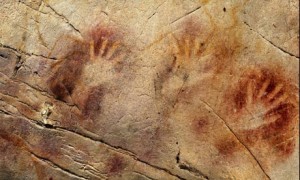 This is art history, to a prehistoric degree. And it just may cause us to rethink whether art belongs to our species alone.

A newly perfected uranium-thorium dating technique has drastically pushed back the dates of several European cave-painting sites, including the above hand stencils from El Castillo cave in Spain. These sites are now found to be thousands of years older than previously thought, with some paintings dating from 40,000 years ago at the most recent.

That date is provocative because it refers to a time when modern humans, Homo Sapiens, were not the dominant hominid on the continent.

Are we looking at the hands–that is, the artwork–of H. Neanderthalensis?

To be sure, there’s no evidence, beyond the dating, that Neanderthals created these 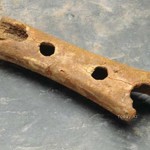 or any other cave paintings. But Neanderthal researchers have previously identified intriguing signs of complex Neanderthal culture, including use of ornamentation, ritualistic burials, even the manufacture of musical instruments. Would painting be such a departure?

It’s also interesting to note that the dating reflects a time of coexistence, possibly even interbreeding, between Neanderthals and their H. Sapien neighbors. So the El Castillo artwork might not have been crafted by another species, but rather our own hybrid ancestors.

One thing’s clear: almost all traces of the artists’ culture have disappeared and are all but unknown to us. Yet still, 40,000 years later, we can look upon their works and admire the very hands that created them.

Doesn't know much about culture, but knows when it's going to hell in a handbasket.
View all posts by editor, facilitator, decider →
This entry was posted in New Post and tagged cave art, cave paintings, El Castillo. Bookmark the permalink.