World got you down? Just dance

If you’ve had any exposure to the news over the last week or so, you know things seem to have gotten very, very bad.

But we’ve got our sanity to look after, don’t we? So just short of escapism, we might enjoy a temporary sort of disengagement; or rather, an alternative engagement in worthwhile distractions.

That’s how I found myself under the stars Friday night, thoroughly entranced by dance.

Culture junkie that I am, I have to admit that dance has never particularly been one of my delights. I suppose my own ineptitude on the floor might be partly to blame. But we’ve got a young dancer in the house, and we live in a city that values and promotes culture in its many forms, and when we learned that Ballet Hispanico would be performing in a park just a short walk from our home, the decision to attend was a pretty easy one. Even if it was ballet, I figured; even if it was boring ballet—well, it was a lovely evening, out of the house in the company of family and neighbors, and removed (if only temporarily) from the swirling global madness that has been monopolizing my attention. 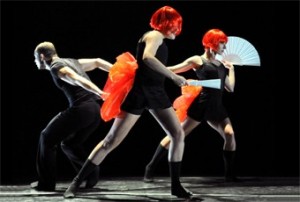 Ballet Hispanico is not boring. I learned that almost immediately. And it’s not ballet, or at least not the sort of ballet I’d built up my prejudices against. How to describe it? To call it modern dance is probably accurate, but an almost too trite and predictable label. It is thoroughly modern, yet still thoroughly mindful of the ageless Latin dance roots from which it draws inspiration. Clearly I lack the experience and expertise to play dance critic, so I’ll probably have to admit that a legitimate analysis is simply beyond me. Besides, I was, as I’ve said, entranced. Analysis would have been beyond me in any case.

In any medium, I think, there should be a story. I’m a sucker for agile storytelling. And that’s where Ballet 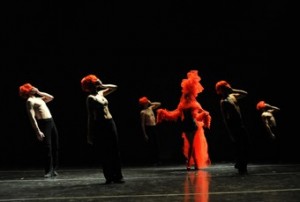 Hispanico won me over—with the story-in-motion unfolding on stage. I won’t pretend I grasped every nuance of every figurante vignette; Ballet Hispanico and I are, in more than one way, worlds apart. But their story, and their storytelling, invited me in to their world. And for that I’m grateful beyond my ability to express.

I’m grateful most of all for that distraction, albeit temporary, of which I already spoke. It’s meaningful and gratifying all the more since it came in the form of an artistic movement that until that beautiful Friday evening had always sadly eluded me. Am I a dance maven now? Probably not. But I’ve moved closer than ever to being an appreciator of dance, which leads me to share with you below a couple glimpses of dance I’m sure you’ll enjoy. That’s enough of a departure, for me and the Deconstruction, to make the world seem like a slightly less scary place.

Doesn't know much about culture, but knows when it's going to hell in a handbasket.
View all posts by editor, facilitator, decider →
This entry was posted in New Post and tagged Art, Ballet Hispanico, current events, dance, deconstruction, what is culture?. Bookmark the permalink.