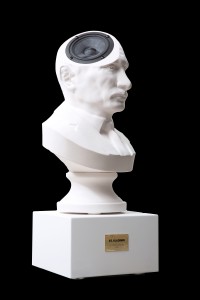 Petro Wodkins is by now an old friend of the Deconstruction—we chuckled with him back in May ’13 when he hijacked Belgium’s beloved Mannekin Pis (and replaced it with himself). And we thrilled with him in the following year when he (artistically!) took  on Zimbabwe’s perfidious strongman, Robert Mugabe.

Petro’s political evolution continues, and this time he’s picked a formidable target indeed—one all too able (and more than likely, willing) to strike back….

As part of a larger performance project called Sound of Power, in which busts of world leaders are fitted with audio speakers (“Play the people who play the world,” says Petro Wodkins), a likeness of Russian president Vladimir Putin was today blown up—after first playing some jaunty tunes of course. Actually, a trio of Putin heads were exploded, and in a gesture to cement the political message in play, they sequentially emitted the colors of the flag of the Russian Federation. 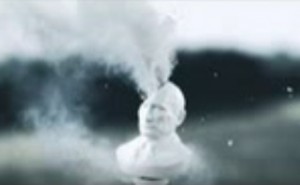 Word from Petro’s camp is that the gesture was noted and denounced in Russian media. I couldn’t independently verify this, my Cyrillic skills being what they are (non-existent), but I did notice, and took it as significant, that the YouTube upload of the performance has been intermittently hacked throughout the day. I’ve imbedded it below, and it was working at post-time, but if you have any trouble viewing it, you might just assume that Bad Vlad doesn’t want you to.

I managed to reach out to Petro (or whatever his real name is) and passed on a few questions. To begin with, I wondered, did he worry about backlash from Putin or his regime?

Putin looks too beautiful as a bust-speaker and likes fireworks. So I think it’s nothing to worry about.

Noting that the Sound of Power project has already gained some press, I asked what other heads we might see in the spotlight soon:

It’s big and complex project, that lasts over the year already. We’ll keep you posted.

I took the liberty of comparing Wodkin’s politically conscious performance art to the all-too-brief Dada movement of the early twentieth century. I asked if he thought that was a fair comparison, and whether we were seeing with him and other artists a flowering of a kind of neo-Dada:

A lot of crucial things are happening…we’re definitely experiencing something. Let’s wait [to give it a name].

Finally, at the risk of not Letting the Art Speak for Itself, I asked Petro what message he was imparting with this performance. Was there, I asked, a message for Putin in particular?

Russians consider him too serious, he is everywhere in our life. Sometimes you are afraid to see him even when you turn on your favourite porn. If people start thinking about Putin as a function, in the way they think about their furniture or bikes, being able to put him aside at any time for any reason, things are going to change. Hopefully once we’ll treat people of power as serious as teddy bears left in a closet years ago. Putin himself doesn’t need any messages from this side of the wall. He thinks he is almost God. It’s not about him. It’s about us.

Doesn't know much about culture, but knows when it's going to hell in a handbasket.
View all posts by editor, facilitator, decider →
This entry was posted in Homepage and tagged Art, audio, Dada, performance art, Petro Wodkins, Russia, Russian Federation, Sound of Power, Vladimir Putin. Bookmark the permalink.