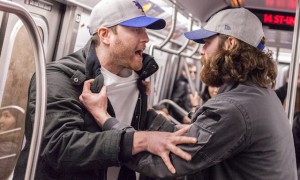 Anyone who’s ever ridden the NYC subway system has shared a collective suppressed groan when a man with a money can stands up and says, “Ladies and gentlemen, can I have your attention….”

So for the benefit of us all (and impeccably timed just when we could all use a laugh), those incomparable flash-mob geniuses at Improv Everywhere have turned that awkward scene on its head. This madcap troupe has already improv(ed) the commuter trudge with its now legendary Annual No-Pants Subway Ride. Would you doubt they can do that one better? Well doubt no further. All they needed were a few sets of identical twins and a nightmare scenario from the future. Behold the Time Travel Subway Car:

Doesn't know much about culture, but knows when it's going to hell in a handbasket.
View all posts by editor, facilitator, decider →
This entry was posted in Homepage and tagged brilliant, flash mobs, Improv Everywhere, New York City, subway. Bookmark the permalink.