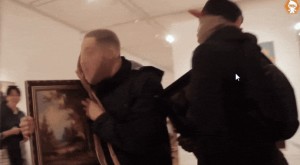 Oh, the imperative to go viral. A million or so YouTubers will tell you that it’s not just transitory fame at stake (alluring though that might be); there’s actual income on the line here, in terms of shares in advertising revenue for the amateur videographer who lures in lots of eyeballs. So the incentives are there to create videos that are controversial, captivating, or catastrophically dumb—whichever seems most likely ensnare the largest audience.

Prank videos are a natural result of this state of affairs, and it wasn’t a stretch to prognosticate they’d get riskier and more intrusive, all in that self-serving quest to go viral, until someone got hurt or someone ended up in jail.

No telling how many times those outcomes have been achieved (common sense tells us it’s probably very common), but in one case at least we have proof, in the form of jail sentences handed down this week in a London courtroom for four not-so merry pranksters, for causing a panic last year at the National Portrait Gallery.

A well-crafted prank can be, in of itself, a work of art. It must be well-intentioned, non-harmful, and funny even to those getting punked. These parameters unfortunately exclude the vast majority of YouTube prank videos, up to and including this one, perpetrated last July. It was the day before the tenth anniversary of London’s appalling 7/7 bombings. It invaded the peace and tranquility of one of the world’s great art museums. The rush to the emergency exits, prompted by the smuggled-in klaxon and the bumbling-burglar antics of these would-be comedians, didn’t devolve into a trampling probably only because of that bred-in British poise.

Ten months later, the prank’s on them, and they’re headed for lockup. Not for terribly long stretches—the four drew an average of 18 weeks. Hopefully just enough time to reflect upon the high cost of page-views.

Doesn't know much about culture, but knows when it's going to hell in a handbasket.
View all posts by editor, facilitator, decider →
This entry was posted in New Post and tagged art theft, National Portrait Gallery, pranks, Youtube. Bookmark the permalink.