A tale of two Renoirs 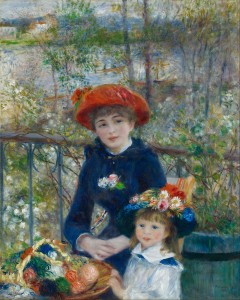 Let’s begin with what we know: Pierre-August Renoir completed “Two Sisters (On the Terrace)” in 1881. He made no copies.

We know that, in the present day, two separate entities claim they own this original Renoir masterpiece. One is the Art Institute of Chicago. The other is the president of the United States.

The Chicago Sisters has hung in the gallery since it was donated in 1933 by Annie Swan Coburn. Coburn purchased it in 1925 from dealer Paul Durand-Ruel, who in turn had purchased it directly from the artist upon its completion in 1881, for 1,500 francs (source).

The version that hangs in Trump Tower may or may not boast such bulletproof provenance. Trump isn’t saying. He insists that his is the original Sisters (he is in fact said to boast often about owning an original Renoir) but declines to share any particulars of its purchase or its history.

We’ve explored in this space often the fraud and deceit that’s endemic to the art world. Well-meaning patrons, cognoscenti, even world-class institutions can and do get taken by talented forgers far more often than most of them would care to admit. Both claimants to the ownership of “Two Sisters (On the Terrace)” would likely be embarrassed should it be revealed theirs was a fake. We can only speculate which would be more averse to embarrassment—and what lengths they might go to avoid such an admission.

To date Trump has resisted all suggestions regarding unbiased authentication of his Renoir, continuing to simply insist that it’s the original. He’s content, evidently, that his word alone should settle the matter.

And so in lieu of employment of the scientific method, we can only once again turn to what we know, and let Occam’s Razor do the rest. Who is more credible, Trump or the AIC? Which is more likely to admit a mistake? Which of them seem most likely to stick to their version of the story, no matter where the facts lead us?

It could very well be that Trump owns the original Renoir, and that the Art Institute of Chicago has been and continues to be snookered. But that’s hardly the point. The point, the overarching lesson—and it’s one that has implications far, far beyond the art world—is that Donald J. Trump has so thoroughly destroyed his own credibility, through his own actions, his personality, and his pathologies, that the razor wielded by Occam pretty much insists to us that Trump is lying. Every time, all the time.

Our own American pathology includes this defensive tic: All politicians lie. It’s one of the ways we force ourselves to accept that which should be completely unacceptable.

But here we’ve gone through the looking glass—here we have a elected specimen that lies so often, reflexively and in the face of easily proven opposing evidence, that we have to assume he lies with every word. If Trump tells you it’s sunny, do yourself a solid and grab an umbrella.

And his Renoir? I’ll be prepared to believe it’s genuine only on the day he publicly declares it a fake.

Doesn't know much about culture, but knows when it's going to hell in a handbasket.
View all posts by editor, facilitator, decider →
This entry was posted in Homepage and tagged Art, art forgery, Art Institute of Chicago, lies, Renoir, Trump, Two Sisters (On the Terrace). Bookmark the permalink.